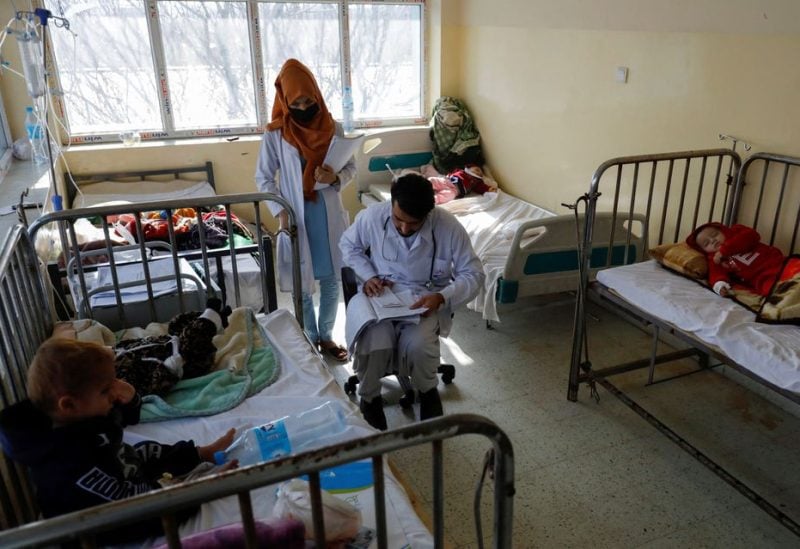 A doctor visits patients in a hospital following an increase in the number of pneumonia cases in Kabul, Afghanistan, December 17, 2022. REUTERS/Ali Khara

Maryam, 22, sat in a bitterly cold Kabul bedroom at the start of winter with her baby son, who coughed days after being discharged from a hospital ward for the third time for suspected pneumonia.

Rahmat, a 10-month-old boy, is sick every time his parents bring him home from the crowded but warmer hospital. The parents said they are doing everything they can with their limited funds to keep the room warm at night, which drops below freezing.

“I am scared, it is only the beginning of winter, what is going to happen?” said Maryam, saying the family could only buy coal in small quantities and had to cut back on food to afford even that after her husband lost his construction job.

The family is among many in Afghanistan unable to afford adequate heating, often having to choose between food and fuel as an economic crisis grips the country.

Doctors and aid workers say thousands of children are being admitted to hospital with pneumonia and other respiratory diseases caused by the cold and malnutrition.

The crisis, aid agencies say, is likely to get worse. A ban on female NGO workers has led to over 180 international organisations suspending operations in the crucial winter months, saying they are unable to operate in the conservative country without female staff to reach out to women and children.

Even before that, more than half the population was reliant on humanitarian aid after the economic shock precipitated by the 2021 Taliban takeover caused Afghanistan’s GDP to shrink by 20% last year.

Afghanistan has been hit by a cut in development spending by foreign governments, an enforcement of Western sanctions and the freezing of the country’s central bank assets that has severely hampered the banking system.

“Our patients have increased compared to the past, the main reason is the economy,” said Mohammad Arif Hassanzai, head of internal medicine at Indira Gandhi Children’s Hospital in Kabul.

Hospital figures showed more than 6,7000 children were admitted in November for pneumonia, coughs, asthma and other respiratory conditions, compared to around 3,700 the same month the previous year.

The International Committee of the Red Cross (ICRC), which supports several hospitals in Afghanistan, said even before the winter months, it had seen a 50% increase of children under five admitted for pneumonia in 2022 compared to the previous year.

“People have been dying of pneumonia this year, including children,” said Lucien Christen, ICRC’s spokesperson in Kabul, adding that malnutrition was contributing to children’s weakened immune systems.

In a ward dedicated to pneumonia patients at the hospital, babies lay two or three to a bed, with worried parents and a handful of stretched medical staff overseeing them. Some mothers held tiny oxygen masks to infants’ faces, while fathers crammed the corridors outside.

Suddenly a clamour broke out. A one-month old baby, Mohammad, stopped breathing and his lips were turning blue. His panic-stricken uncle, holding the child in a green blanket, was directed to a specialized emergency unit two floors below. He dashed downstairs, as the baby’s mother ran behind in tears.

In the high dependency unit, Mohammad was connected to an oxygen tube via his nose. The doctor said he was in critical condition and would take five days to stabilise.

His mother remained at the baby’s bedside. Her husband had lost his job and they could not afford heating, she said. Watching her son stop breathing, she said, “it felt like my own heart had stopped.”