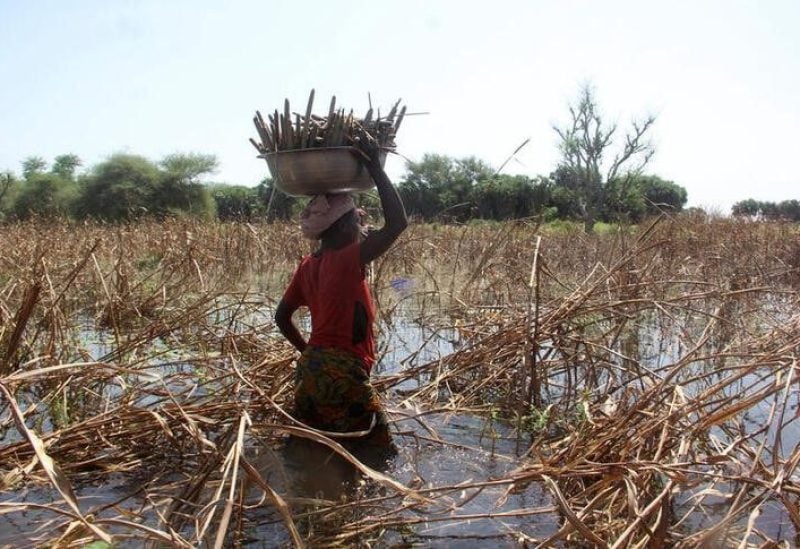 Bernadette Handing carries Pearl Millet Ear Head as she plods through the submerged sorghum field after heavy rain in Kournari village, on the outskirts of Ndjamena, Chad October 26, 2022. REUTERS/Mahamat Ramadan

Over 85 African insurers have pledged to establish a financing facility to provide $14 billion in coverage to assist the continent’s most vulnerable communities in dealing with climate disaster risks such as floods and droughts.

The commitment to establish the African Climate Risk Facility (ACRF) during the COP27 climate talks on Wednesday comes as developing countries press their wealthier counterparts to do more to help them pay for the costs of responding to such events.

Demand for compensation for the “loss and damage” caused by global warming has long been rejected by wealthy countries, whose leaders are wary of accepting liability for the emissions driving climate change.

Africa, which accounts for less than 4% of greenhouse gas emissions, has long been expected to be severely impacted by climate change.

Against that backdrop, the African insurance plan is based around creating a scalable, local market-based funding tool to help countries better manage the financial risk of climate shocks and increase the resilience of its more vulnerable communities, the group said in a statement.

“This is the African insurance industry saying let’s come together and try and solve this ourselves,” said Kelvin Massingham, director risk and resilience at FSD Africa, one of the partners behind the launch.

“We have a massive risk gap in Africa and existing solutions aren’t working,” Massingham said. FSD Africa is a UK government-backed development group.

The ACRF will provide protection for 1.4 billion people against floods, droughts and tropical cyclones by providing $14 billion of climate risk insurance by 2030 to African sovereigns, cities, humanitarian organisations and NGOs, the insurers said.

The group is calling for $900 million in funding from development partners and philanthropies to support the project, much of which will go towards providing a subsidy on the cost of the premium to help governments and cities with limited fiscal resources buy the cover.

These donor funds will be held in a trust and managed by the African Development Bank.

“The facility will enable us to cover certain risks like floods, cyclones and droughts…and to help us mitigate the risks we face as underwriters dealing with these climate risks,” said Philip Lopokoiyit, chief executive at Nairobi-based insurer ICEA LION Group.

The insurance commitment is the first from the 85 signatories of the Nairobi Declaration on Sustainable Insurance, signed in April 2021 by the industry to support the U.N. Sustainable Development Goals.

The ACRF will provide a domestically funded alternative to global initiatives like the World Bank’s Global Risk Financing Facility and the Global Shield Financing Facility, a new funding facility that will help countries that suffer heavy economic loss due to climate change-driven disasters, announced by World Bank president David Malpass on Tuesday.