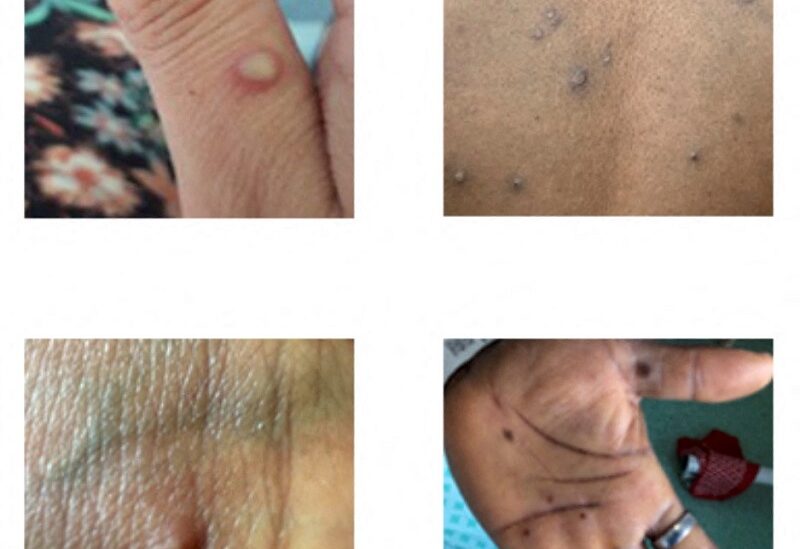 Pictures showing examples of rashes and lesions caused by the monkeypox virus are seen in this handout image obtained from official Centres for Disease Control and Prevention (CDC) website on July 1, 2022. NHS England High Consequence Infectious Diseases Network/CDC/Handout via REUTERS THIS IMAGE HAS BEEN SUPPLIED BY A THIRD PARTY.

African countries’ lack of laboratory diagnosis and weak surveillance means many monkeypox cases are going undetected across the continent. Health authorities in Africa say they are treating the expanding monkeypox outbreak there as an emergency and are calling on rich countries to share the world’s limited supply of vaccines in an effort to avoid the glaring equity problems seen during the COVID-19 pandemic.
Monkeypox has been sickening people in parts of central and west Africa for decades, countries in Africa have reported more than 1,800 suspected cases so far this year including more than 70 deaths, but only 109 have been lab-confirmed.
“This particular outbreak for us means an emergency,” said Ahmed Ogwell, the acting director of the Africa Centers for Disease Control.
“We want to be able to address monkeypox as an emergency now so that it does not cause more pain and suffering,” he said.
Last week, WHO said its emergency committee concluded that the expanding monkeypox outbreak was worrying, but did not yet warrant being declared a global health emergency. The UN health agency said it would reconsider its decision if the disease continued spreading across more borders, showed signs of increased severity, or began infecting vulnerable groups like pregnant women and children.
Globally, more than 5,000 cases of monkeypox have been reported in 51 countries, according to the US Centers for Disease Control
and Prevention.
The majority of those cases are in Europe. No deaths beyond Africa have been reported.
Within Africa, WHO said monkeypox has spread to countries where it hasn’t previously been seen, including South Africa, Ghana and Morocco. But more than 90% of the continent’s infections are in Congo and Nigeria, according to WHO’s Africa director, Dr. Moeti Matshidiso.
She said that given the limited global supplies of vaccines to fight monkeypox, WHO was in talks with manufacturers and countries with stockpiles to see if they might be shared.
The vaccines have mainly been developed to stop smallpox, a related disease — and most are not authorized for use against monkeypox in Africa.
Vaccines have not previously been used to try to stamp out monkeypox epidemics in Africa; officials have relied mostly on measures like contact tracing and isolation.
“We would like to see the global spotlight on monkeypox act as a catalyst to beat this disease once and for all in Africa,” she said at a press briefing Thursday.
WHO noted that similar to the scramble last year for COVID-19 vaccines, countries with supplies of vaccines to stop monkeypox are not yet sharing them with African countries.
“We do not have any donations that have been offered to (poorer) countries,” said Fiona Braka, who heads WHO’s emergency response team in Africa. “We know that those countries that have some stocks, they are mainly reserving them for their own populations.”
WHO said last month it was working to create a mechanism to share vaccines with countries with the biggest outbreaks, which some fear could see vaccines go to rich countries like Britain, Germany and France, some of the agency’s biggest donors and who already have their own supplies.
While monkeypox cases in Europe and North America have been mostly identified in men who are gay, bisexual or sleep with other men, that is not the case in Africa.
WHO’s Tieble Traore said that according to detailed data from Ghana, the numbers of monkeypox cases were almost evenly split between men and women.
“We have not yet seen spread among men who have sex with men,” he said.
Among monkeypox cases in Britain, which has the biggest outbreak beyond Africa, the vast majority of cases are in men.
Scientists warn that anyone is at risk of catching monkeypox if they come into close, physical contact with an infected patient or their clothing or bedsheets.
In Africa, monkeypox has mainly been spread to people from infected wild animals like rodents or primates.
It has not typically triggered widespread outbreaks or rapid spread between people.