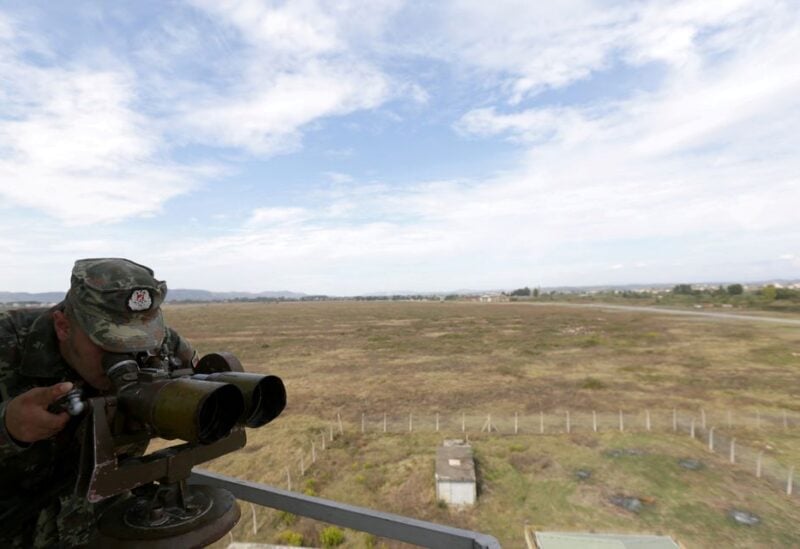 An Albanian Military Force member use uses binoculars in Kucova Air Base in Kucova, Albania, October 3, 2018

On Sunday, Albania said it was investigating why two Russians and a Ukrainian attempted to enter a military factory, while police apprehended four Czech nationals near another military complex.

The defense ministry announced late Saturday that two of its troops were slightly hurt while holding a 24-year-old Russian man who had infiltrated the Gramsh military industrial premises and was attempting to take pictures. He resisted arrest and sprayed pepper spray on the soldiers.

Two others, a 33-year-old Russian lady and a 25-year-old Ukrainian male, were apprehended nearby.

Defense Minister Niko Peleshi stated on Sunday that it was too early to determine the purpose, but he did mention geopolitics, implying a possible relation to Russia’s invasion of Ukraine, which the Albanian government has condemned.

Albanian Prime Minister Edi Rama stated on Saturday that the three people were “suspected of espionage,” although he did not elaborate.

According to Tirana-based media, the three accused were bloggers who frequently visited abandoned military camps and other large installations in other nations.

Peleshi stated that the probe will reveal if they were bloggers and what their motivations were.

During communism, the Polican facility was used to manufacture ammunition for the Russian-made rifle AK 47, hand grenades, anti-personnel and anti-tank mines. Some international visitors who have previously visited the area have managed to access the tunnels where the ammunition was manufactured, and their images have been released on the internet.

According to their images, the place appeared abandoned, with outdated machinery and gunshot shells on the ground.

Albania, a NATO member since 2009, has joined the United States and other Western countries in condemning Russia’s invasion of Ukraine and imposing sanctions on Moscow.