Algerian Lawyers Go on Strike in Protest against Activist’s Arrest 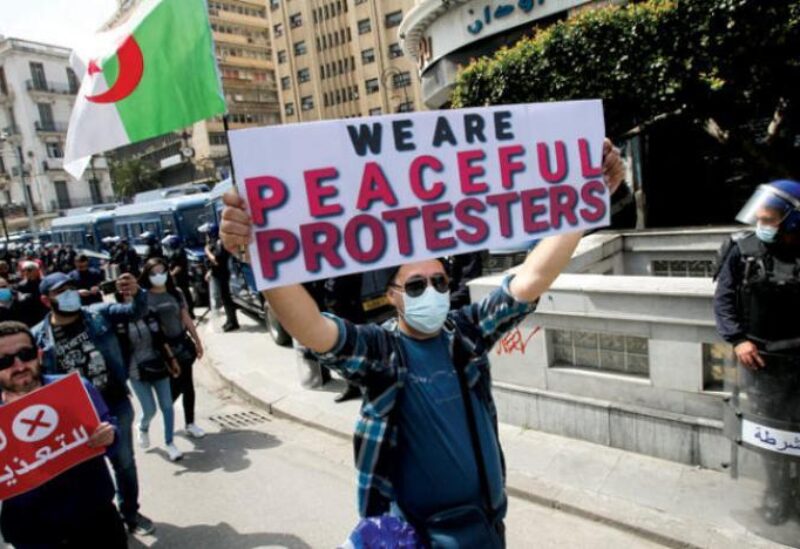 Hundreds of Algerian lawyers demanded the release of their colleague, human rights activist Abderaouf Arslane, who has been in pretrial detention since May 25 on charges of belonging to a banned Islamist movement.

Algerian lawyers went on a nationwide boycott of hearings in protest against Arslane’s arrest and detention in Bar Tebessa, 600 km east of Algiers. He has been held for 25 months.

The protesters marched around the courts in response to the request of the National Union of Bar Associations (UNOA), which boasts 22,000 members.

A number of renowned lawyers joined the protest at the Algiers’ Court of Appeals, most notably members of the Hirak protest movement, Mostefa Bouchachi, and Abdelghani Badi. Dozens of angry attorneys stood silently in their robes at the entrance of the court.

Badi told Asharq Al-Awsat that the case against Arslane is a warning to all lawyers and aims to discourage them from defending Hirak activists.

The demonstrators demanded Arslane’s immediate release and denounced the political charges against him, stressing that his detention was linked to his political activity.

The head of the UNOA, Ahmed Sai, said in a statement that the allegation that Arslane belongs to “a terrorist organization” is baseless.

The statement noted that the preliminary investigation mentions probabilities and provides no evidence for the allegation formed by the Tebessa public prosecutor.

It “regrets” that the prosecutor “violated the principle of presumption of innocence and investigative secrecy” by holding a press conference accusing Arslane of belonging to a terrorist group.

The Public Prosecutor had announced in a press conference that the gendarmes found documents in the lawyer’s office proving his affiliation with the Islamist Rachad Movement, which authorities have blacklisted, along with the Kabylie Independence Movement (MAK) separatist group.

He confirmed that the lawyer is being probed for criminal acts, stressing that his arrest is not related to his profession.

He said that Arslane hosted several meetings in his office to organize Friday protests and that he had “contacts with suspicious foreign parties.”

The lawyers defended Arslane’s “right to political activity,” saying his meetings with Hirak activists in his office do not constitute a “charge.”