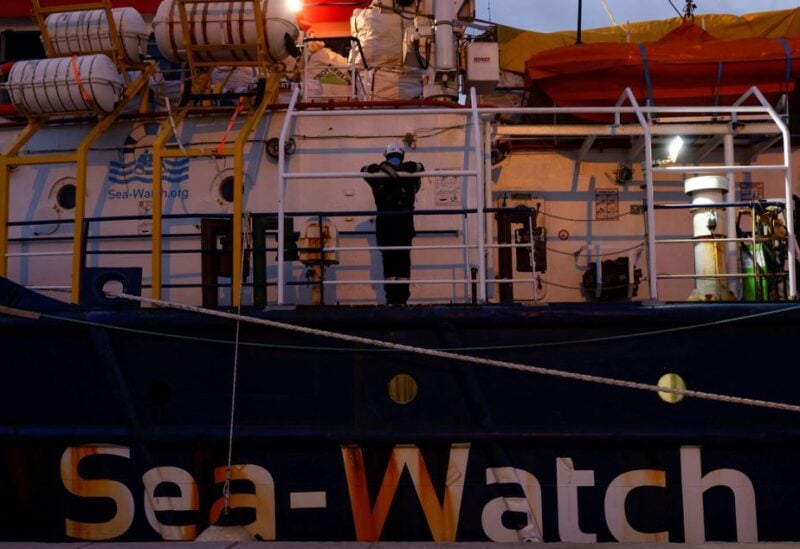 A crew member of the German NGO migrant rescue ship Sea-Watch 3 watches as an ill migrant is medically evacuated from the ship, while waiting for the last group of migrants to disembark from the ship in Trapani on the island of Sicily, Italy August 8, 2021. REUTERS/Darrin Zammit Lupi

Almost 700 migrants—including five bodies—were rescued on Saturday off the southern coast of Italy as the number of people traveling across the Mediterranean increases due to favorable weather conditions, according to a coastguard statement released on Sunday.

The majority of the 674 migrants were discovered on a fishing boat 124 miles off the Italian peninsula of Calabria. Others who were in the water were saved.

Search and rescue operations were carried out by a merchant vessel and Italy’s coastguard and finance police.

The migrants were transferred to port cities in Sicily and Calabria on Sunday morning, the statement added. The five dead bodies were brought to the morgue in the hospital of the Sicilian city of Messina.

More than 34,000 asylum seekers and migrants have landed in Italy since the start of the year, up from some 25,500 in the same period last year, data from Italy’s interior ministry shows.

Mediterranean countries on major migrant routes into Europe expect more than 150,000 arrivals this year as food shortages caused by the Ukraine conflict threaten a new migration wave from Africa and the Middle East.

On Sunday morning, Norwegian-flagged ship Ocean Viking spotted an overcrowded rubber boat in the international waters off the coast of Libya and rescued 87 people, including 57 unaccompanied minors, it said on Twitter.

Separately, on Saturday German NGO search and rescue ship Sea-Watch rescued over 400 migrants, including several young children and two pregnant woman, travelling on four overcrowded boats. According to Sea-Watch, flat seas and lack of wind have helped arrivals of migrants to the Italian coasts.

In Lampedusa, over 400 migrants have disembarked since last night, after a further 350 people on Saturday, challenging the migrant reception centre on the island, which is dealing with over 1,000 people.