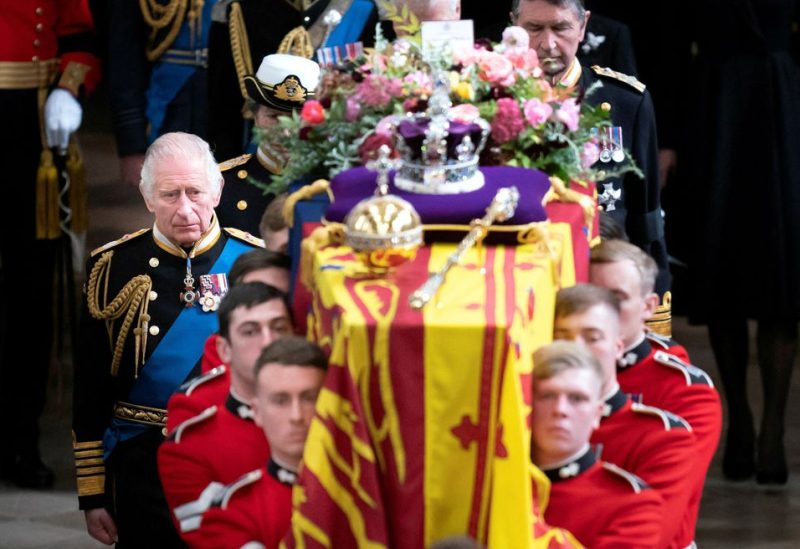 Britain's King Charles and members of the royal family follow behind the coffin of Britain's Queen Elizabeth, draped in the Royal Standard with the Imperial State Crown and the Sovereign's orb and sceptre, as it is carried out of Westminster Abbey after her State Funeral, London, Britain, September 19, 2022. Danny Lawson/Pool via REUTERS/File Photo

The death of Queen Elizabeth in the last year, just months after she celebrated her record seventh decade as monarch, will go down as one of the most seismic in the history of the British royal family, but 2023 could be almost as significant.

With four days of national celebrations occurring in the early summer, Elizabeth celebrated her 70th year as monarch in February, breaking just much every record for a monarch in a lineage dating back 1,000 years to the Norman invasion of England.

But there were already signs the 96-year-old’s health was failing. Her public appearances became rare and she only appeared for a couple of her Platinum Jubilee events.

On Sept. 8, just two days after she was pictured appointing her 15th prime minister, the only monarch most Britons had ever known – and who much of the rest of the world also regarded as “the Queen” – died at her Scottish home. The cause of death was old age, the official certificate said.

In the modern world, Elizabeth had been without compare – a leader who had met almost every major global figure since World War Two, and whose longevity as head of a major state was only bettered by France’s King Louis XIV who died in 1715.

It was an end of an era not just for her nation but for her family. Her son automatically became King Charles III, and in accordance with one of Elizabeth’s final wishes, his second wife Camilla became queen consort.

One of the first acts of the new monarch, the 41st since William the Conqueror, was to grant his eldest son and heir William and his wife Kate the titles Prince and Princess of Wales – a role previously held by the late Princess Diana.

Elizabeth’s success had been to guide the monarchy into the modern world, riding out the many crises that befell her family. But, as the institution looks to a future without her, it does so with some dark clouds overhead.

Charles’s brother Prince Andrew remains persona non grata after settling a U.S. sex abuse court case, and there are questions, including a police inquiry, over allegations of cash being given to Charles’s charities in return for honours.

Most damaging of all is the rift with Charles’s younger son Prince Harry and his wife Meghan, who now live in California, and their criticism of the royal household.

On Jan. 10, “Spare”, is published – Harry’s memoir in which he tells his story with “raw unflinching honesty” according to the publisher.

Harry and Meghan’s interview with U.S. talk show host Oprah Winfrey in March 2021 rocked the institution and the royal family will be anxiously waiting to see if there are further damning revelations in the book.

The major set piece event for the year will be King Charles’s coronation – a solemn and religious event conducted by the Archbishop of Canterbury, the spiritual head of the Anglican Communion. It will include pageantry and traditions dating back centuries, and will be only the second to be televised after his mother’s in 1953.

However, with Britain mired in a cost of living crisis, the ceremony will be scaled back with the royals conscious not to be seen to be putting on an overly expensive show of grandeur. Likewise, William has no plans for a grand investiture to be formally made Prince of Wales as his father had in 1969.

Charles, 74, will be crowned king not just of Britain but 14 other realms including Australia, Canada and New Zealand. But many of those in the Caribbean, such as Jamaica, Antigua and Barbuda, and the Bahamas have indicated they wish to ditch the monarch as head of state.

Whether 2023 is dominated by his coronation, internal family rows or an exodus of his realms, it is likely to set the tone for Charles’s reign.

Explore the Reuters round-up of news stories that dominated the year, and the outlook for 2023.