Arab League Summit to kick off in Algeria with condemnation of Houth militias, foreign meddling 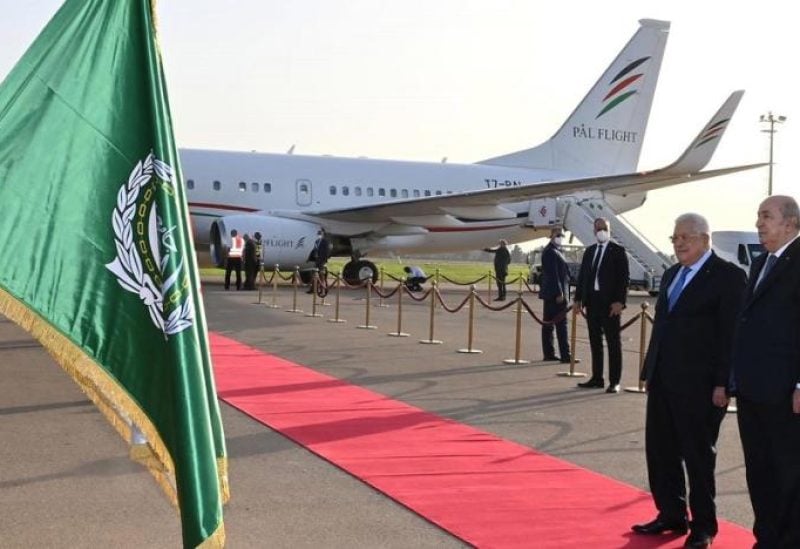 Arab leaders and delegations began arriving in Algiers on Monday to attend the two-day Arab League summit that will kick off on Tuesday.

Senegal’s President Macky Sall, a guest of honor at the summit, was also among the arrivals.

Algerian Foreign Minister Ramtane Lamamra said Arab foreign ministers had held two days of consultations that led to agreements that would facilitate the proceedings of the summit. Among the issues at hand were food security in the Arab world and social and economic affairs.

Asharq Al-Awsat obtained a copy of the closing statement of the Algiers summit. It stressed that resolving the Palestinian-Israeli conflict remained pivotal to the Arab world.

The conflict must be resolved in line with international resolutions and the 2002 Arab peace initiative, which stipulates the establishment of a Palestinian state according to the 1967 border and having East Jerusalem as its capital.

The statement backs the peace plan proposed by President Abbas that calls for the establishment of an international mechanism to sponsor credible peace negotiations.

On Yemen, the statement underscored the commitment to the unity of the country, its sovereignty, security and stability. It backed the Yemeni government’s commitment to peace based on the three references: the Arab initiative and its executive mechanism, national dialogue outcomes and United Nations Security Council 2216.

It declared its backing to the Saudi peace initiative and condemned the escalation of the Iran-backed Houthi militias. It slammed the Houthis for their ballistic missile and drone attacks against civilian locations throughout Yemen.

It condemned the “grave Houthi human rights violations,” stressing support to “Saudi Arabia and the United Arab Emirates’ right to defend themselves and retaliate against the Houthi attacks.”

It commended Saudi Arabia and the UAE’s keenness on respecting and committing to international law.

On Iran, the statement slammed its meddling in the internal affairs of Arab countries that is stoking sectarian conflicts. It condemned Iran for supporting groups that are fueling these conflicts, especially in the Gulf region.

The statement urged that the financing of armed groups and militias in the Arab world be ceased.

Moreover, it denounced the terrorist Houthis for firing Iranian-made ballistic missiles and drones against Saudi Arabia, the UAE and Yemen. It deemed the attacks a threat to Arab national security, underscoring the Kingdom and UAE’s right to defend their territories in line with Article 51 of the UN Charter.

The statement slammed Iranian meddling in Bahrain’s internal affairs, especially its support to terrorist acts and groups. It accused Tehran of stoking sectarianism aimed at destabilizing the kingdom and of forming terrorist groups that are trained and financed by the Iranian Revolutionary Guards.

The statements also condemned Iran’s meddling in the Syrian crisis, warning that it has “dangerous” repercussions on the future of the Arab country, its stability, security, sovereignty and territorial integrity and the safety of the region.

The Arab statements called for taking a united Arab stand against Turkish violations of Iraqi sovereignty. It demanded that it withdraw its forces from Iraqi territories in line with a 2015 Arab League resolution.

It urged Türkiye to refrain from carrying out provocations in Iraq that are threatening the stability and security of the region.

The statement also condemned Turkish attacks on Syria, saying they were flagrant violations of UN principles and Security Council resolutions that support the war-torn country’s unity and stability.

It slammed Türkiye for hosting extremist groups and providing them with safe haven. Türkiye was criticized for financing media platforms that incite the use of violence to destabilize Arab countries.

Turning to Lebanon, the statement called for providing political and economic support to its government and constitutional institutions in order to preserve Lebanese national unity and the country’s stability, security and sovereignty.

It expressed its support to Lebanon’s right to resist any hostile act through legitimate means.

On Syria, the statement stressed that an inclusive political solution was the only way to resolve the ongoing crisis. The solution must be in line with relevant international resolutions.

The Arab League stressed that it will continue to back UN efforts aimed at ensuring the success of Syrian negotiations. It underlined the need to intensify efforts to reach a comprehensive nationwide ceasefire, which would be a significant first step towards achieving the political solution.

It also emphasized the need to end foreign military intervention in Syria and the withdrawal of all foreign forces from its territories.

On Libya, the Arab statement stressed the importance of its unity and sovereignty, rejecting all forms of foreign meddling.

It urged against military escalation, underscored the fight against terrorist groups and called for the withdrawal of mercenaries and foreign fighters from Libya.

The Arab League called for establishing a constitutional foundation for holding transparent and free elections.