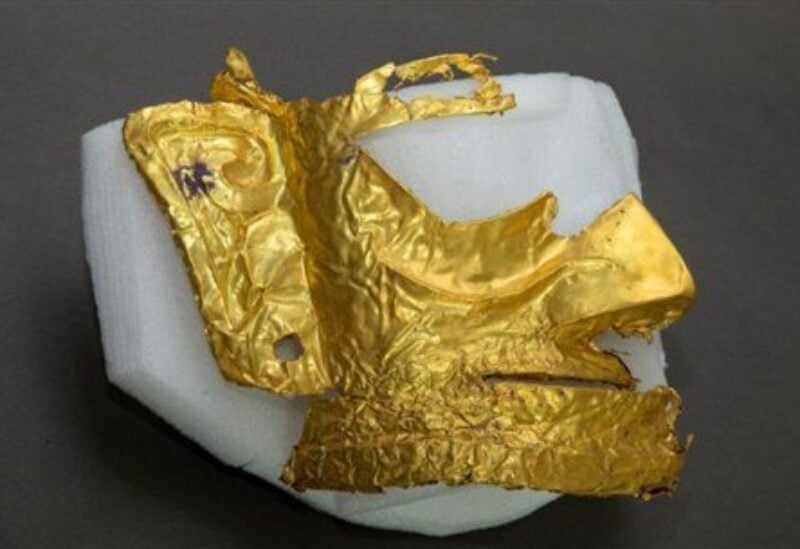 The remains of a gold mask are among a huge cache of 3,000-year-old artifacts found at an archaeological site in China’s Sichuan province.

Weighing about 280 grams (0.6 pounds) and estimated to be made from 84% gold, the ceremonial mask is one of over 500 items unearthed from six newly discovered “sacrificial pits,” according to the country’s National Cultural Heritage Administration.

The finds were made at Sanxingdui, a 4.6-square-mile area outside the provincial capital of Chengdu. Some experts say the items may shine further light on the ancient Shu state, a kingdom that ruled in the western Sichuan basin until it was conquered in 316 BC.

In addition to the gold mask, archaeologists uncovered bronzes, gold foils and artifacts made from ivory, jade and bone. The six pits, of which the largest has a footprint of 19 square meters (205 square feet), also yielded an as-yet-unopened wooden box and a bronze vessel with owl-shaped patterning.

More than 50,000 ancient artifacts have been found at Sanxingdui since the 1920s, when a local farmer accidentally came upon a number of relics at the site. A major breakthrough occurred in 1986, with the discovery of two ceremonial pits containing over 1,000 items, including elaborate and well-preserved bronze masks.

After a long hiatus in excavations, a third pit was then found in late 2019, leading to the discovery of a further five last year. Experts believe the pits were used for sacrificial purposes, explaining why many of the items contained were ritually burned as they were dropped in and buried.

Sanxingdui is believed to have sat at the heart of the Shu state, which historians know relatively little about due to scant written records. Discoveries made at the site date back to the 12th and 11th centuries BC, and many of the items are now on display at an on-site museum.

The site has revolutionized experts’ understanding of how civilization developed in ancient China. In particular, evidence of a unique Shu culture suggests that the kingdom developed independently of neighboring societies in the Yellow River Valley, which was traditionally considered to be the cradle of Chinese civilization.

The deputy director of the National Cultural Heritage Administration, Song Xinchao, told state-run press agency Xinhua that the latest finds “enrich and deepen our understanding of the Sanxingdui culture.”

The discovery of silk fibers and the remains of textiles may also expand our understanding of the Shu. Head of the excavation team and chief of the Sichuan Provincial Cultural Relics and Archaeology Research Institute, Tang Fei, said in a press conference that the discovery indicates that the kingdom “was one of the important origins of silk in ancient China,” according to Xinhua.

Though not yet recognized as a UNESCO World Heritage Site, Sanxingdui is on the organization’s “tentative list” for possible future inclusion. Along with other Shu archaeological sites, it is credited by the UN agency as “an outstanding representative of the Bronze Age Civilization of China, East Asia and even the world.”