Argentina’s president says he was next target for assassination 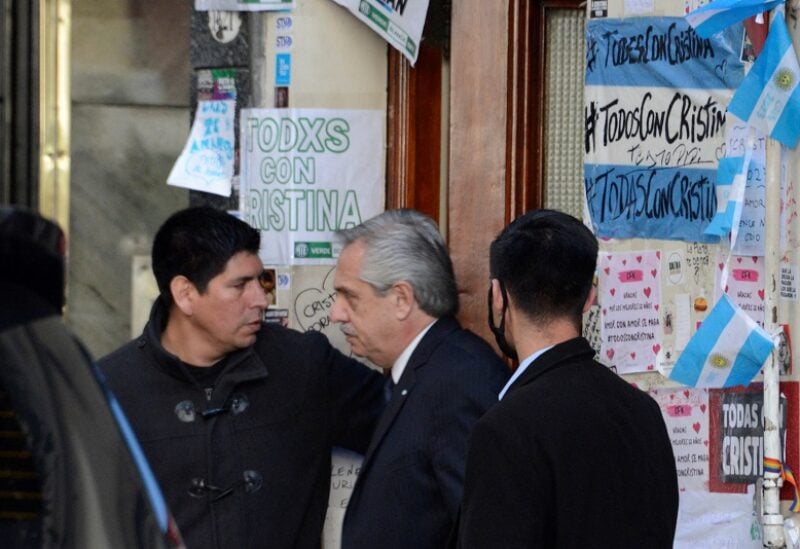 Argentina's President Alberto Fernandez leaves the home of Vice President Cristina Fernandez a day after an incident in which a man pointed a gun at VP Fernandez outside her home, in Buenos Aires, Argentina September 2, 2022. REUTERS/Magali Druscovich ATTENTION EDITORS - BEST QUALITY AVAILABLE

Fernandez told the Spanish TV channel Telecinco: “The culprits’ conversations became known and they said that the next one is me,” referencing suspects Fernando Sabag Montiel and Brenda Uliarte, who have been indicted.

Investigators believe the couple planned and organized the attempted assassination of de Kirchner, although the charges may be revised as authorities continue their probe.

Fernandez added that he must be cautious regarding his personal security.

“I have to be careful in case it happens to me, but I cannot separate myself from people,” he said.

“We have to be vigilant. What I don’t want is for us to be separated from the people. That’s not Argentina,” he added, labelling the suspects “a gang of scoundrels.”

Fernandez went on to say that de Kirchner is “fine” but confirmed that “it was a moment of shock for everyone,” insisting that since the country’s return to democracy, there have been no political crimes of this nature.

The Argentine leader described the image of a gun being pointed at the vice-president’s head as “hard,” admitting there had been a failure in the security operations protecting her.

“The whole security system in these circumstances fails. That person (Sabag Montiel) knew that he was in the middle of a crowd that was going to cheer and accompany Cristina, and he knew that, whatever the result, he was going to be arrested by the people around him,” he said.

The president also touched on the difficulty for authorities to foresee such events.​​​​​​​

“When you are willing to risk your life or your freedom to achieve your objective, it is very difficult to predict” such an attack.

But Fernandez also made it clear that he believes that Sabag Montiel, who appears to have far-right sympathies and tattoos relating to Nazism, is fully sane.

Fernandez suggested during the program that society is not doing something well if such a “horrible idea enters a person’s head.”

“He is not a Martian or a person outside our society. He lives among us. He is not a madman. He is a person with his full faculties.”