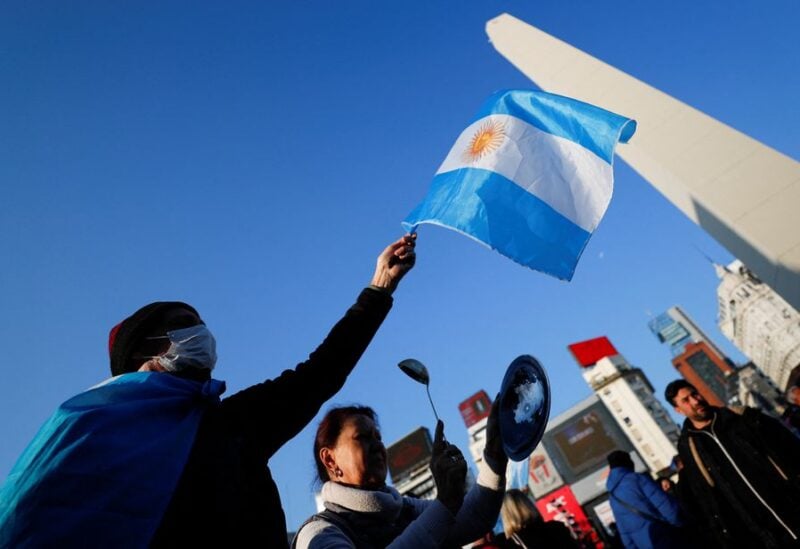 Argentine President Alberto Fernandez made an appeal for unity on Saturday as demonstrators slammed his government for spiraling inflation and a crippling national debt and marched across the capital to the gates of the presidential palace.

The hardline left wing of the ruling coalition, which wants more government spending to reduce high poverty rates and inflation, is posing an increasing threat to the center-left president. His Cabinet has lost two significant moderate allies in the past month.

The South American country, a major producer of soy and corn, is grappling with inflation running at over 60%, huge pressure on the peso currency and spiking gas import costs that are draining already weak foreign currency reserves.

In a speech to mark the anniversary of Argentina’s declaration of independence, Fernandez called for “unity” and asked different factions to work towards it.

“History teaches us that it’s a value we must preserve in the toughest moments,” he said, adding the country needed economic responsibility with low foreign currency reserves and soaring global inflation “seriously damaging” the local economy.

“We must walk the path towards fiscal balance and stabilize the currency.”

Argentina, which has cycled through economic crises for decades, struck a $44 billion debt deal with the International Monetary Fund earlier this year to replace a failed 2018 program. Many blame the IMF for tighter economic policies.

In the streets of Buenos Aires thousands of protesters marched on Saturday afternoon with banners saying “breakaway from the IMF” and “Out, Fund, out”. Marchers criticized the government and called for debt payments not to be made.

Parts of the government, including powerful Vice President Cristina Fernandez de Kirchner, have called for more spending to alleviate the impact of COVID-19 and of the war in Ukraine, which have lit protests in countries globally such as Sri Lanka.

“There is a monumental crisis within our country,” said Juan Carlos Giordano, a socialist lawmaker who joined the march.

“Argentina is a capitalist semi-colony in the chains of the IMF. Today we are here to say we need a second independence. Argentina must break its ties with the IMF which is the Spanish Empire of the 21st century.”

Fernandez’s government was thrown into turmoil a week ago with the abrupt resignation of moderate Economy Minister Martin Guzman, a close ally to the president who had spearheaded talks with the IMF. He was replaced by economist Silvina Batakis.

Batakis, seen as closer to the left-wing of the ruling coalition than Guzman, spoke with the IMF on Friday and has pledged economic stability despite concerns over a populist policy shift that have dragged down bonds and rattled the peso.

“The resignation of the economy minister showed there is an economic and financial collapse that is affecting the lives of workers, of the whole the population,” said Workers’ Party member Marcelo Ramal.

“We must consider that this year we’ll have around 80%-90% inflation with wages that aren’t rising as fast.”