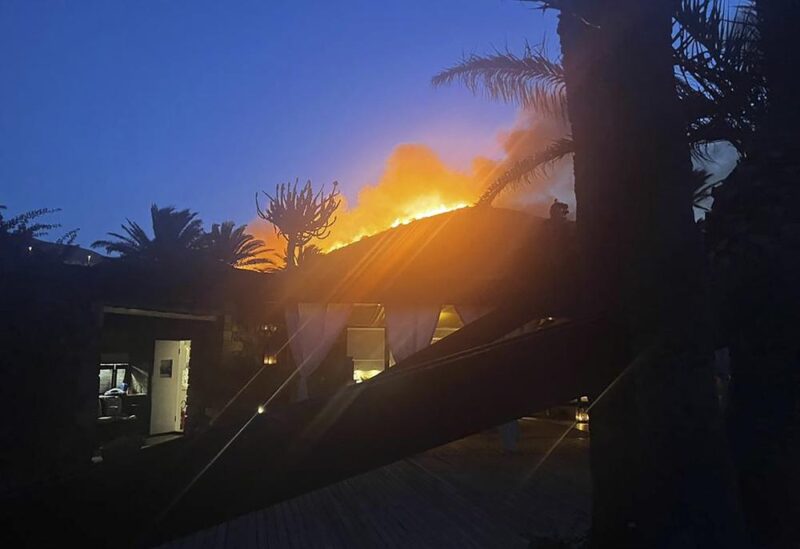 Flames burn beyond fashion designer Giorgio Armani's villa on the Sicilian island of Pantelleria, Wednesday, Aug. 17, 2022. The designer and his guests evacuated overnight to a boat in the port, and the flames stopped short of the property, according to his press office. (Armani Press Office Via AP)

Firefighters battled to put out the embers of two wildfires on the Sicilian island of Pantelleria on Thursday, forcing fashion designer Giorgio Armani and dozens of others to leave their vacation villas.

According to his press office, the flames stopped short of Armani’s villa despite a photo appearing to show them approaching it. In the evening, Armani and his guests boarded a boat in the harbor.

The head of the region’s civil protection agency, Salvatore Cocina, said arson is suspected in two wildfires that forced around 30 people to seek refuge in boats or on safer parts of the island. Firefighters used Canadair planes to douse the flames, along with ground teams to protect homes. Authorities said no structures appeared to have been lost.

The island’s mayor, Vincenzo Campo, told the ANSA news agency two Canadairs were working on putting out the last flames on difficult terrain and that the wind had dropped off.

“After the great fear of last evening and the night spent at work, Pantelleria is returning to normal,” Campo said. “It seems the worst is over.”

Local officials appealed for any information that would help identify the cause of the blaze, which started in two points 400 meters (a quarter-mile) apart.

Pantelleria, located between Sicily and the Tunisia, is a popular beach and trekking destination that includes ancient archaeological sites and natural geographic formations.