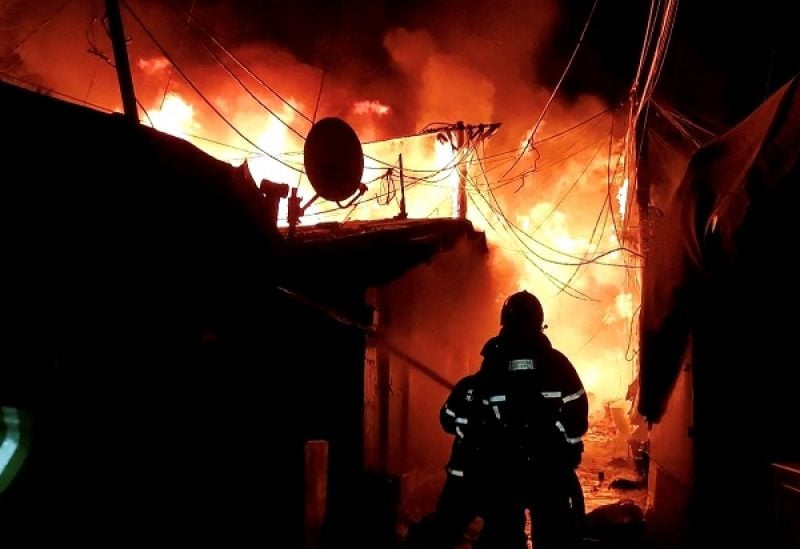 Firefighters work to put out the fire at Guryong village, the last slum in Seoul's glitzy Gangnam district in Seoul, South Korea, January 20, 2023. South Korea's National Fire Agency/Yonhap via REUTERS ATTENTION EDITORS - THIS IMAGE HAS BEEN SUPPLIED BY A THIRD PARTY. SOUTH KOREA OUT. NO RESALES. NO ARCHIVE.

Around 500 people being evacuated, as a massive blaze in a shanty town in the South Korean capital, Seoul broke out, fire officials said. The fire broke out at 6:27 am Friday in Guryong Village, which houses approximately 660 families.
The fire department is trying to bring the blaze under control with about 290 firefighters, 10 helicopters and police officers on the site.

About 40 homes in the 1,700-square-meter (18,000-square-foot) area have been destroyed, fire officials said. However, no casualties were reported.

President Yoon Suk Yeol has instructed authorities to make all-out efforts to minimise the damage and mobilise all available firefighters and equipment, his spokeswoman Kim Eun-hye said.
Authorities are also working to avoid any secondary damage, as instructed by Interior Minister Lee Sang-min, and are trying to protect residents in nearby areas.

The slum area is prone to disasters, such as floods and fires, due to the way the shanties have been built. Most of them are constructed using flammable material, like cardboard and wood.

The slum starkly stands out, sitting right next to the flashy, affluent district of Gangnam. One of the last remaining slums, the village is a symbol of inequality in Asia’s fourth-largest economy.

Redevelopment and relocation have been on hold for the longest time as land owners, residents and authorities are at loggerheads. Seoul said Mayor Oh Se-hoon visited the village and asked officials to draw up measures to relocate families affected by the fire.