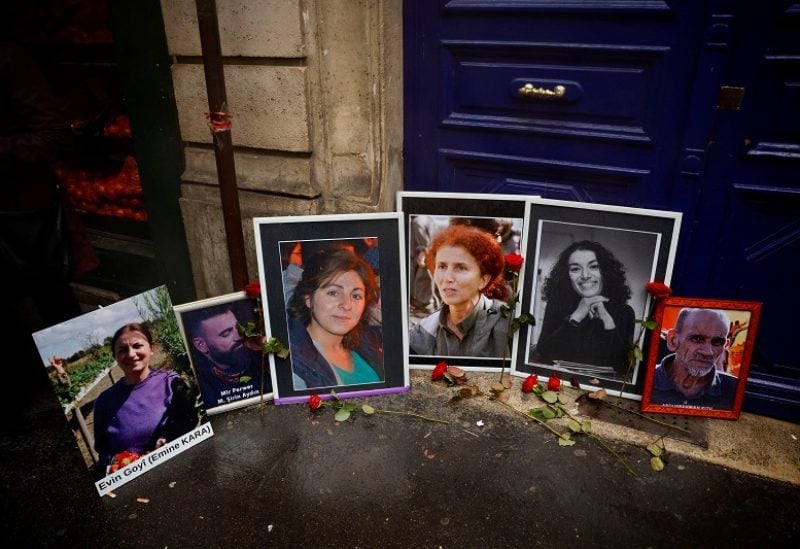 Portraits of six victims who were killed in attacks in 2013 and 2022 are seen as members of the Kurdish community hold a march organised by the Kurdish Democratic Council in France (CDK-F) in tribute to the victims of Friday's deadly attack, in Paris, France, December 26, 2022. REUTERS/Sarah Meyssonnier

In the aftermath of the killing of three Kurds in a shooting last Friday, which many believe is connected to Turkey, Ankara doesn’t seem to be taking the matter lightly and summoned France’s ambassador over “anti-Turkey propaganda” in the country. It has alleged that French officials have done little to stop the protests being reported in Paris and elsewhere.
Kurdish groups and their supporters staged protests in the French capital following the shooting. Some of the protesters waved flags of the Kurdistan Workers’ Party (PKK) — designated as a terrorist organisation by Turkey and its Western allies. Others held banners with slogans accusing Turkey of being a killer state and connected to the shooting.
A Turkish diplomatic source told AFP that the French ambassador was summoned to the foreign ministry for allegedly failing to stop the “black propaganda” that it says is being promoted by the PKK.
“We expressed our dissatisfaction with the black propaganda launched by PKK circles against our country and with the fact that the French government and some politicians are used as a tool in this propaganda,” the source said.
The source further alleged that the PKK’s false allegations were used “by French government officials and some politicians” against Ankara.
“We expect France to act prudently in the face of the aforementioned incident,” the source said.
Turkey and France have not been on the best of terms over their position on various matters, such as the conflict in Syria and a range of other regional disputes.
The 69-year-old white French man, the suspect in the case, opened fire at a Kurdish cultural centre in Paris. He has confessed to a “pathological” hatred for foreigners. He was charged with murder, attempted murder because of race, ethnicity, nationality or religion as well as for the unauthorised procurement and possession of a weapon on Monday, a judicial source said.
Meanwhile, hundreds of people marched in the French capital to pay tribute to the victims. Around 600 people also attended a tribute rally in the northwestern French city of Rennes on Monday evening, the Ille-et-Vilaine prefecture said. Protesters took to the streets in the 10th district on Monday, with several hundred people marching in the 10th district, chanting “our martyrs do not die” in Kurdish and demanding “truth and justice”.