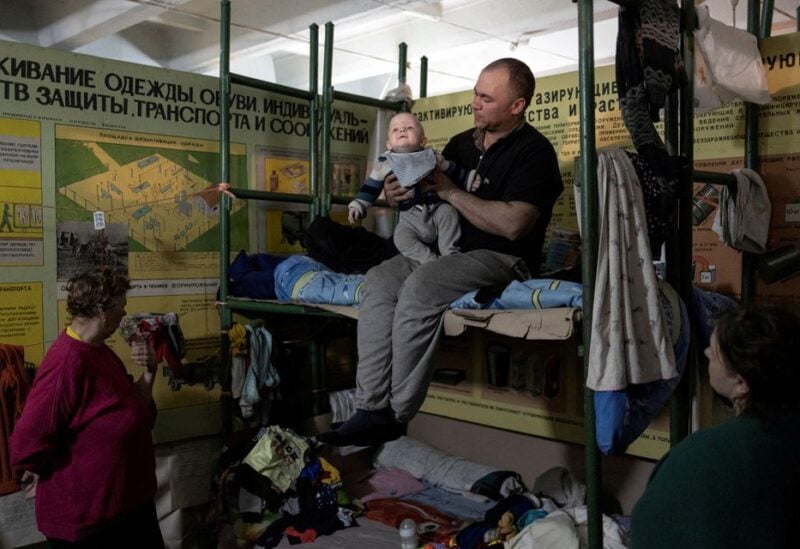 A man holds his baby inside Azot chemical plant's bomb shelter, where people have been hiding from from shelling since the beginning of the war, in Sievierodonetsk, Luhansk region, Ukraine, April 16, 2022. REUTERS/Marko Djurica

Russian forces have taken control of nearly a third of the Ukrainian city of Sievierodonetsk, although their assault is taking longer than they had intended, according to a Moscow-backed separatist leader quoted in a TASS news agency report.

Russian shelling has left much of Sievierodonetsk in ruins, and Russian troops have moved into the city’s southeastern and northeastern outskirts, but the Ukrainian defense has stalled the Russian advance across the Donbas region.

“We can say already that a third of Sievierodonetsk is already under our control,” TASS quoted Leonid Pasechnik, the leader of the Luhansk People’s Republic, as saying in a report on Tuesday morning.

Pasechnik told the Russian state news agency that fighting was raging in the city, but Russian forces were not advancing as rapidly as might have been hoped.

“But we want, above all, to maintain the city’s infrastructure,” he said.

The advance of Russian troops was complicated by the presence of several large chemical plants in the Sievierodonetsk area, TASS reported.

Luhansk was recognised as independent by Russia when Moscow launched its invasion of Ukraine on Feb. 24., although Kyiv and its Western allies consider it part of Ukraine. Russia has been pressing to seize the entire Donbas region, consisting of the Luhansk and Donetsk regions which Moscow claims on behalf of separatist proxies.