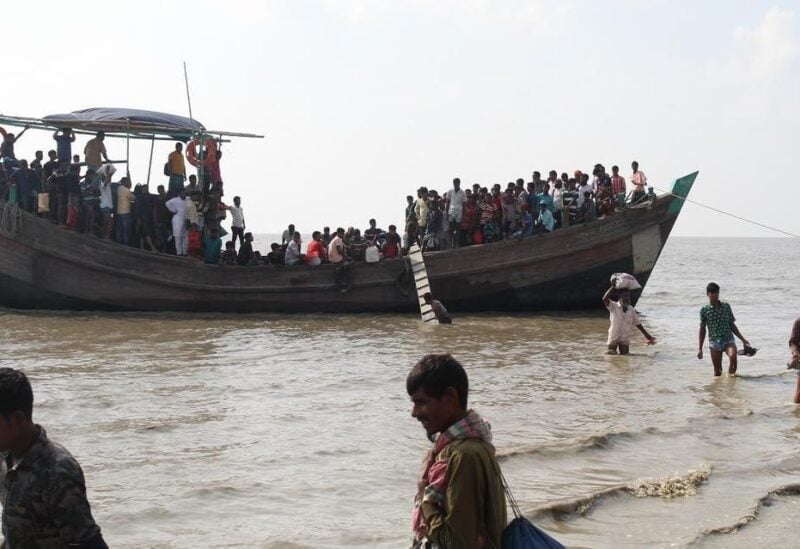 People get off a boat in Bhashan Char island off the Bangladeshi coast, as it was being prepared for the relocation of Rohingya refugees living in the country's south. (File photo: AFP)

At least 27 Rohingya refugees were missing after their boat sank Saturday during an attempt to escape a Bangladeshi island camp criticized by human rights groups, officials said.

Nearly 20,000 Rohingya have been relocated to Bhashan Char island, which takes the full force of cyclones that roar across the Bay of Bengal each year.

Bangladesh eventually wants to rehouse 100,000 of its approximately one million Rohingya refugees to the island, moving them from cramped settlements on the mainland.

But some Rohingya say they were coerced into relocating while thousands protested living conditions on the island in June.

After the incident, the United Nations refugee agency said it “remains concerned about reports of refugees being arrested and detained for attempting to leave Bhashan Char.”

Police said the small fishing boat sank with 41 Rohingya on board after encountering rough weather in the Bay of Bengal near the island. Fourteen were rescued, while a search operation is underway to locate those still missing.

Chanda said a two-year-old was dramatically saved by his father who held the child above water while swimming for safety.

Bangladesh started relocating refugees to the controversial island camp in November, saying the refugee camps in the country’s southeast were overcrowded.

Police said scores of Rohingya have fled the island in recent months and been arrested in coastal towns in Bangladesh’s Chittagong region.

Abdur Rahim, 27, who fled Bhashan Char months ago, said a lack of work on the island has pushed people to flee.

“Living there is horrible. There is no opportunity to meet relatives. It’s like they are keeping us in jail without giving us any opportunities,” he said.

Amnesty International’s South Asia Campaigner Saad Hammadi said Bangladesh must “ensure that any relocation to the island is voluntary” and refugees have “the right to freedom of movement between the island and mainland, where many of them have their families and relatives.”