At least 3 dead, 4 missing in Spain after bus plunges off bridge into river 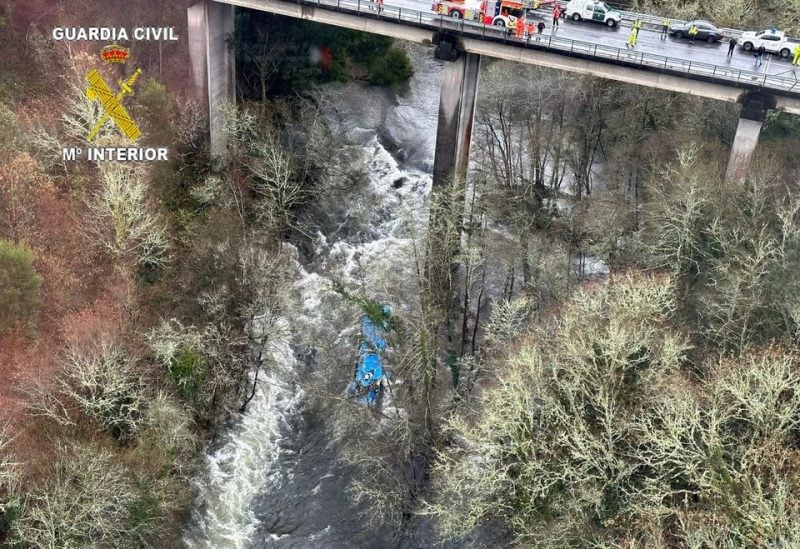 Emergency services work at the scene of an accident where a passenger bus plunged off a bridge into the river Lerez in Cerdedo-Cotobade, northwestern Spain, December 25, 2022. GUARDIA CIVIL/Handout via REUTERS

In northwest Spain, a passenger bus careened off a bridge and into a river, leaving at least three people dead and four more missing, local emergency services reported on Sunday.

The driver and a passenger of the car have so far been pulled from the river Lerez, where search and rescue operations are being hampered by a strong current and high flow brought on by the region of Galicia’s recent downpours.

They stated that the surviving were transported to surrounding hospitals in varied states of injuries.

Between the cities of Lugo and Vigo, a coach from the business Monbus had stopped at a prison center close to the accident location.

Around 9.30 p.m. local time (2030 GMT) on Saturday, it veered off the road on the bridge for an unknown cause before crashing into the lake.

Preliminary information indicates that the bus carried nine persons in all, including the driver and eight passengers, according to Maica Larriba, a regional official.

“There are no more bodies inside the bus, so we are continuing the search for the four missing people,” Larriba added, referring to the findings of police divers who inspected the wreckage.

The river remained above its overflow threshold throughout the night, forcing emergency rescue workers to suspend the operation for nearly two hours due to the bad weather and terrain conditions before resuming in the morning.