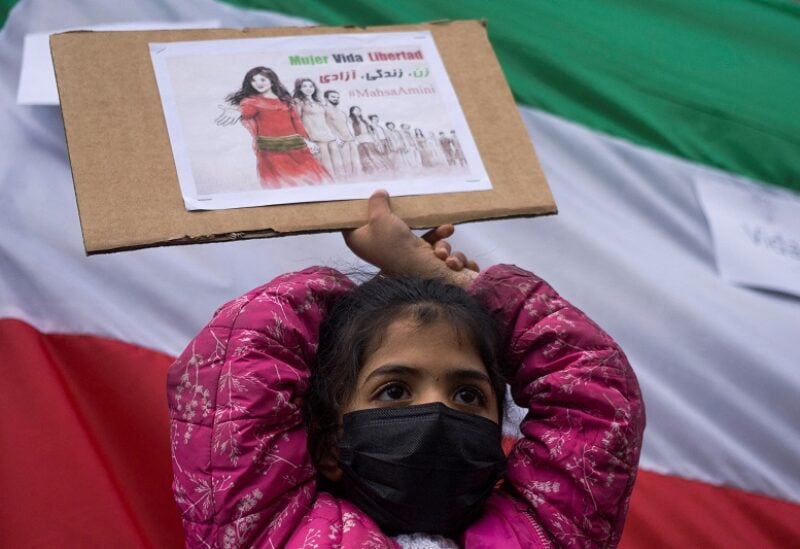 A girl holds a sign during a solidarity rally following the death of Iranian Mahsa Amini, who died last week in Iran after being arrested by morality police, Santiago, Chile September 23, 2022. REUTERS/Ailen Diaz

In the afteremath of the death of a young woman in police custody, at least 35 have been killed in more than a week of protests that erupted in Iran, state media reported.

“The number of people who died in recent riots in the country has risen to 35 people,” the Borna news agency, which is affiliated to the sports ministry, said late Friday, citing state television.

The official toll had previously stood at 17 dead, including five security personnel.

Demonstrators have taken to the streets of major cities across Iran, including Tehran, for eight straight nights since the death of Mahsa Amini.

The 22-year-old Kurdish woman was pronounced dead three days after her arrest in the Iranian capital for wearing the hijab headscarf in an “improper” way.
Thousands of people marched through Tehran during a pro-hijab rally Friday, paying tribute to security forces who have moved to quell a week of protests by what media called “conspirators.”

Demonstrations in support of the security forces also took place in several cities across the country including Ahvaz, Isfahan, Qom and Tabriz.

Amini died after spending three days in a coma after her arrest by Iran’s morality police, a unit responsible for enforcing the Islamic Republic’s strict dress code for women.

Activists said she suffered a blow to the head in custody but this has not been confirmed by the Iranian authorities, who have opened an investigation.

On Friday night, Interior Minister Ahmad Vahidi said Amini had not been beaten.

“Reports from oversight bodies were received, witnesses were interviewed, videos were reviewed, forensic opinions were obtained and it was found that there had been no beating,” Vahidi was quoted as saying by Iranian media.

The minister indicated said the government was investigating the cause of Amini’s death, adding “we must wait for the final opinion of the medical examiner, which takes time.”