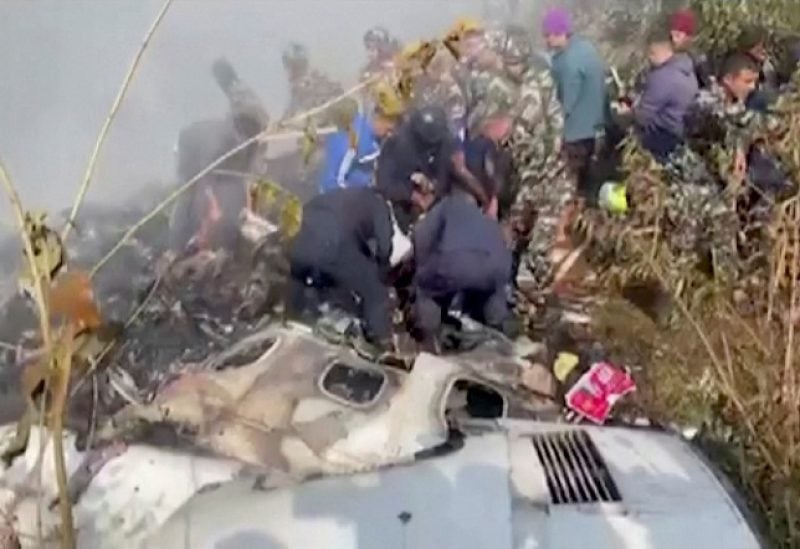 Rescuers work at the site of a plane crash in Pokhara, Nepal January 15, 2023, in this screen grab taken from a handout video. ANI/Handout/via REUTERS ATTENTION EDITORS - THIS IMAGE HAS BEEN SUPPLIED BY A THIRD PARTY. INDIA OUT. NO COMMERCIAL OR EDITORIAL SALES IN INDIA

A Yeti Airlines aircraft crashed in Pokhara in Nepal on Sunday, which led to the killing of at least 40 people, a Nepal aviation authority official said.
“Rescue operations are on,” said Jagannath Niroula, spokesman for Nepal civil aviation authority. “Weather was clear.”
Local television showed thick black smoke billowing from the crash site as rescue workers and crowds of people gathered around the wreckage of the aircraft.
There were 72 people on the twin-engine ATR 72 aircraft operated by Nepal’s Yeti Airlines, including two infants, four crew members and 10 foreign nationals, said airline spokesman Sudarshan Bartaula.
Hundreds of rescue workers were scouring the hillside crash site.
The plane was 15 years old, according to flight tracking website FlightRadar24.
The ATR72 is a widely used twin engine turboprop plane manufactured by a joint venture of Airbus and Italy’s Leonardo. Yeti Airlines has a fleet of six ATR72-500 planes, according to its website.
Air accidents are not uncommon in Nepal, home to eight of the world’s 14 highest mountains, including Everest, as the weather can change suddenly and make for hazardous conditions.
Nepal Prime Minister Pushpa Kamal Dahal has called an emergency cabinet meeting after the plane crash, a government statement said.