At least 60 dead in tanker explosion in Haiti 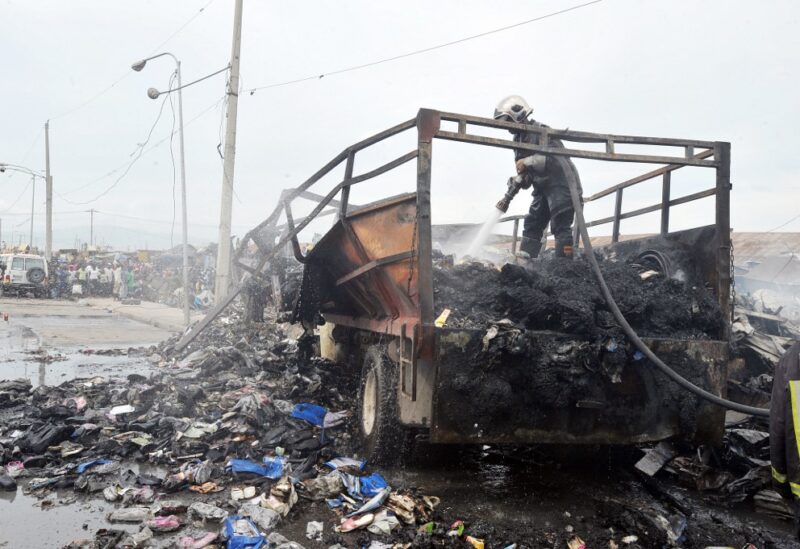 Haitian firefighters battle a blaze set off by an explosion at the Hyppolite Market on May 30, 2013, in Port-au-Prince. Two deaths have been reported in the explosion and subsequent fire. Witnesses said the explosion was caused by chemicals stored at the market, which had been restored after the 2010 earthquake. AFP PHOTO/Thony BELIZAIRE (Photo by THONY BELIZAIRE / AFP)

A petroleum tanker burst overnight in Cap-Hatien, Haiti’s second-largest city, killing at least 60 people and injuring scores more, officials said Tuesday, the latest in a string of man-made and natural disasters to hit the Caribbean nation this year.

According to Prime Minister Ariel Henry, the bomb in the port city 124 miles north of Port-au-Prince caused severe damage. Images showed brilliant red and orange flames licking at houses in the dark, burnt vehicles and motorbikes on city streets, partially blown-off roofs, and the twisted remnants of a tanker capsized in a ditch.

“Three days of national mourning will be decreed throughout the territory, in memory of the victims of this tragedy that the entire Haitian nation is grieving,” Henry said in a tweet. “Field hospitals will be quickly deployed in Cap-Haïtien to provide the necessary care to the victims of this terrible explosion.”