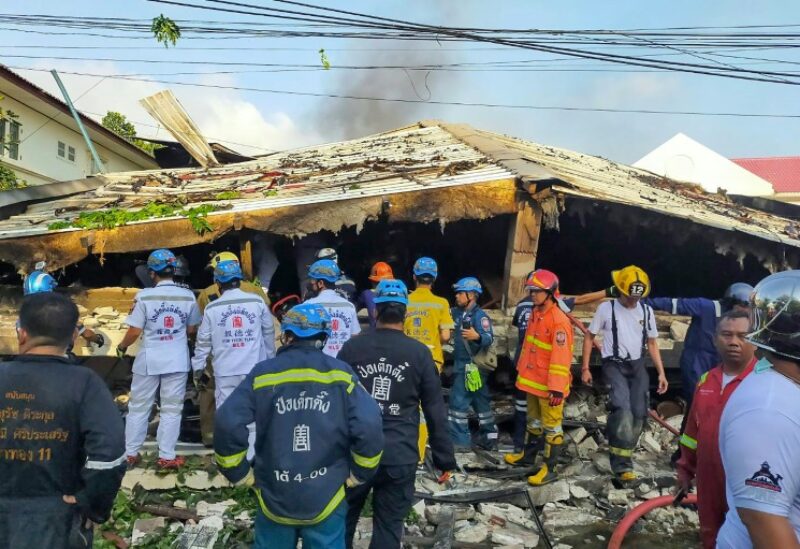 A Bangkok residence building collapsed on Saturday, killing at least three rescue workers and a resident and trapping a handful of people under the debris, according to an emergency worker.
The three-story house, located in a luxury gated community in western Bangkok, was engulfed in flames around 6 am and the fire raged for about an hour before it was put out.
At around 7 am, as firefighters and rescue workers were moving through the razed structure in the Thai capital, it abruptly collapsed, killing at least four, including a resident.
“The cause of the collapse remains unknown. The fire could be the main reason for interiors of the residence building to collapse,” Jiratthikorn Banjongkit, chief of rescue at the Poh Teck Tung Foundation, said.
He added there might be about five people still under the crumpled heap of concrete walls and wiring structure.
It remains unclear how the rescue workers will be able to safely retrieve those trapped, said Bangkok governor Aswin Kwanmuang.
“There’s still no safe passage,” he told reporters.
“We will have to gradually drill and use small-sized equipment as larger equipment could cause (the debris) to collapse further.”
Aswin added that a forensic team was investigating the cause of the fire.
Building collapses are rare in metropolis Bangkok, which is replete with gleaming towering malls and residential sprawl.