At least three dead as fighting rips through Libyan capital 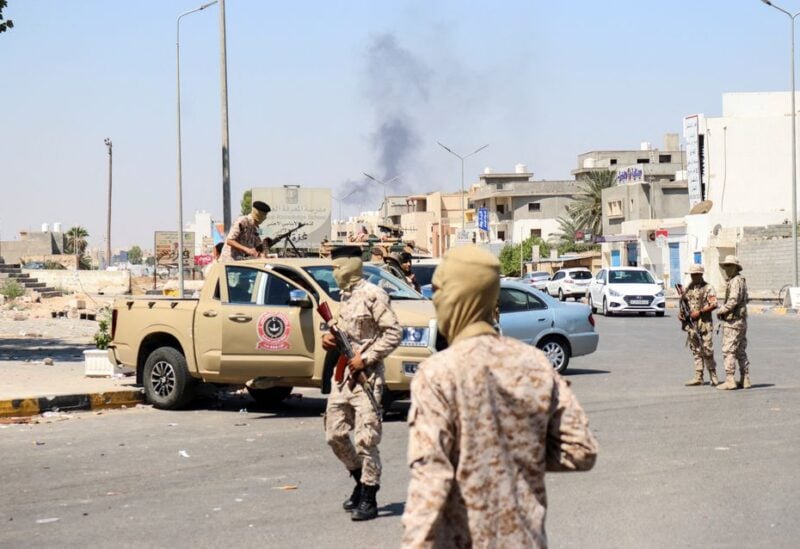 Members of the Libyan armed unit, 444 Brigade, backing the Government of National Unity (GNU) and its Prime Minister Abdulhamid al-Dbeibah, set up a checkpoint as smoke rises in the background in Ain Zara area in Tripoli, Libya, July 22, 2022. REUTERS/Hazem Ahmed

A symptom of the unrest around a political impasse is the violent battles that broke out between opposing Libyan factions in Tripoli overnight. These skirmishes resulted in the deaths of numerous persons, and firing continued intermittently throughout the morning.

Fighting broke out in a major location that is home to a number of diplomatic missions, foreign organizations, and government offices, and it later expanded to the neighborhoods of Ain Zara and Asbaa.

The main sides involved were both affiliated to the Presidency Council, and included the RADA force, an Interior Ministry spokesperson said.

Fighters from RADA, one of the most powerful forces in Tripoli, were visible around most central areas on Friday morning, while the main Presidency Council building was empty.

The Interior Ministry spokesperson said three civilians were killed but had no information on casualties among the armed factions. A witness at a hospital said he had seen six bodies. Local television stations reported at least 10 dead.

The shooting began suddenly before midnight and lasted for hours. On Friday morning, after a period of calm, a Reuters journalist in Tripoli heard further exchanges of fire.

However, later on Friday the situation appeared calm in central Tripoli though there were burned out vehicles in the streets and others with bullet holes. Fighters were mobilised around the central area.

A security source and a passenger at Tripoli’s main Mitiga airport said flights there had been halted and were being rerouted to the airport at Misrata, about two hours drive from the capital.

Libya has been teetering on the edge of chaos for months after the eastern-based parliament rejected the unity government in Tripoli, which was installed through a U.N.-backed process last year, and appointed a rival administration.

There was no sign that Friday’s clashes were linked to the wider political problems, but both prime ministers have support from among the armed factions that control territory in the capital and other western Libyan cities.

The parliament-appointed prime minister, Fathi Bashagha, has been unable to move into Tripoli because groups in the capital backing the Government of National Unity (GNU) there and its prime minister, Abdulhamid al-Dbeibah, have prevented his entry.

Over recent weeks, political shifts have pointed to a possible realignment among power brokers and armed factions that could prompt renewed fighting.

The biggest protests for years occurred earlier this month in cities across Libya controlled by rival factions, underscoring popular anger over the lack of elections and poor state services.

A blockade of oil output by groups aligned with eastern commander Khalifa Haftar had meanwhile cut off funding to Dbeibah’s government.

But last week Dbeibah appointed a new state oil company chief, said to be an ally of Haftar, leading to a swift end of the blockade.

That prompted reports of a deal between Haftar and Dbeibah to keep him in power. This week saw a first visit to Tripoli by a senior officer from Haftar’s Libyan National Army (LNA) as part of scheduled talks to maintain a 2020 ceasefire.

Western Libyan armed factions battled Haftar during his assault on the capital from 2019-20 and refuse to accept him having influence in Tripoli – something that previously counted against Bashagha but may now also be a problem for Dbeibah.

This week Bashagha visited the key western city of Misrata – the hometown of both him and Dbeibah – for the first time since his appointment by parliament. The move led to mobilisations in the city both by groups backing and opposing him.