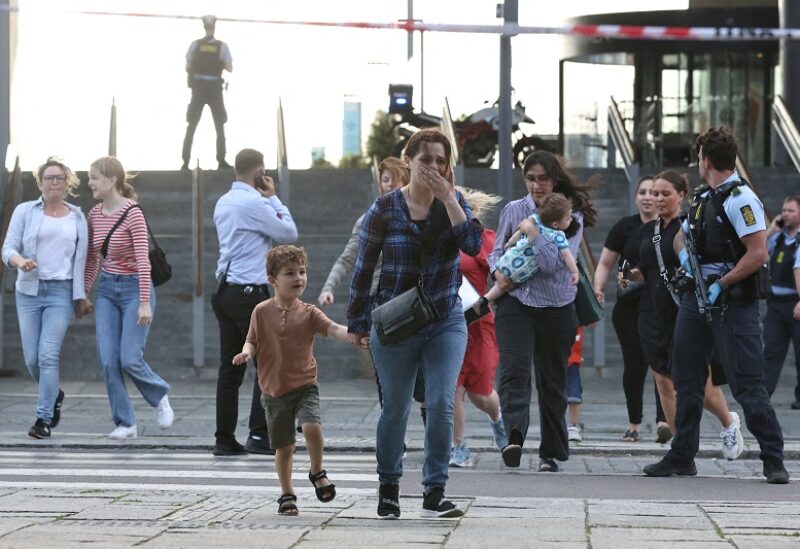 People leave Field's shopping centre, after Danish police said they received reports of a shooting at the site, in Copenhagen, Denmark, July 3, 2022. Ritzau Scanpix/Olafur Steinar Gestsson via REUTERS ATTENTION EDITORS - THIS IMAGE WAS PROVIDED BY A THIRD PARTY. DENMARK OUT. NO COMMERCIAL OR EDITORIAL SALES IN DENMARK.

A gunman opened fire at a packed mall in the capital Copenhagen, killing three people and injuring several, among whom three are said to be in critical condition.

He said the victims included a man in his 40s and two “young people,” without giving details. Several others were injured, three of them critically, he said.

On social media, people had been speculating about a racist motive, or some other, but the head of the investigation said, ” I cannot say that we have anything which supports that at this moment.”
Police, however, confirmed that they were probing videos posted online which claimed to show the suspect with weapons and pointing a gun at his head.

According to witnesses, the young Danish man, armed with a large rifle, started shooting uniseriately at the large Fields shopping mall, located between the city centre and Copenhagen airport.

He was arrested peacefully shortly after police arrived at the scene.

A spokesman for Rigshospitalet, Denmark’s largest hospital, told CNN that the hospital had taken in several victims and had called in extra staff to deal with the emergency.

A phone line for victims has been opened and police said they have set up a central location where eyewitnesses can get support and report their experiences to law enforcement officials.

In a statement on Sunday night, Danish Prime Minister Mette Frederiksen expressed sympathy, saying, “We have all been brutally ripped from the bright summer that had just begun. It is incomprehensible. Heartbreaking. Meaningless. Our beautiful and usually so safe capital was changed in a split second.”

Sunday’s gun attack is the worst in Denmark’s history since February 2015, when a 22-year-old man was killed in a shootout with police after going on a shooting spree in the capital that left two people dead and five police officers wounded.

The shooting comes a week after a mass shooting in neighbouring Norway, where police said a Norwegian man of Iranian origin opened fire during a LGBTQ festival, killing two and wounding more than 20.