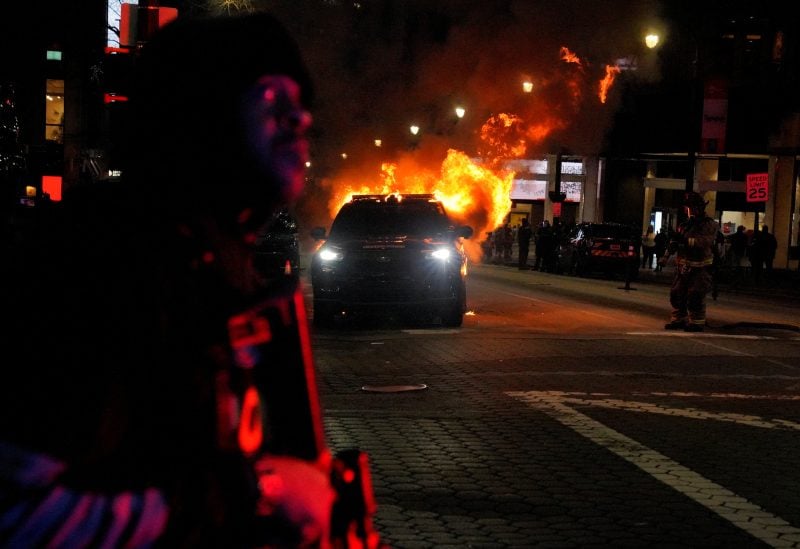 A law enforcement vehicle is seen lit on fire during demonstrations related to the death of Manuel Teran who was killed during a police raid inside Weelaunee People's Park, the planned site of a controversial "Cop City" project, in Atlanta, Georgia, U.S., January 21, 2023. REUTERS/Cheney Orr

Protesters in Atlanta momentarily turned the situation violent by torching a police cruiser and breaking windows of nearby structures.

Demonstrators had come to voice their outrage over the killing of an activist by law police on Wednesday during a raid to clear the construction site of a public safety training center that has been mocked as “Cop City” by activists.

The demonstration started peacefully, then abruptly escalated with some protesters throwing fireworks and rocks and smashing buildings’ windows with hammers, according to a Reuters witness.

As police moved on the marchers, the violence quickly fizzled without anyone injured. A Reuters photographer saw a protester who was carrying a banner being handcuffed by law enforcement.

The demonstrators were protesting an incident that occurred on Wednesday, when Manuel Teran, 26, was inside a tent and did not comply with officers’ “verbal commands” as law enforcement cleared Weelaunee People’s Park. Some activists had been camping there since last year to protest the facility.

According to the Georgia Bureau of Investigation (GBI), Teran shot a state trooper and was shot and killed by officers returning fire.

On Friday, GBI released a photo of a handgun police say was in Teran’s possession at the time of the shooting.

Opponents of the $90 million project south of Atlanta, which would be built by the Atlanta Police Foundation, say building it would lead to destruction of hundreds of acres of forest and greatly damage the environment.