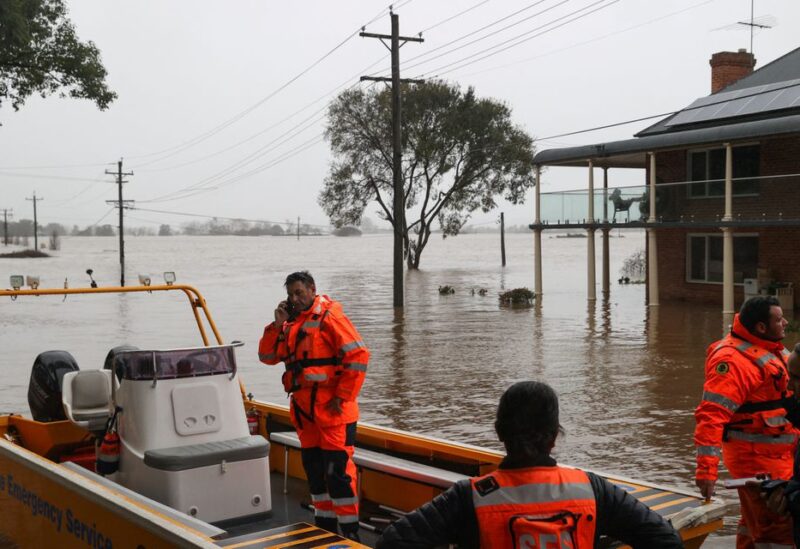 Authorities reported that as of Tuesday, 50,000 people in New South Wales, the majority of whom reside in Sydney’s western suburbs, had either been ordered to evacuate or had been given a warning that they might do so.

Dominic Perrottet, the premier of New South Wales, told reporters, “This event is far from done.” “Please drive carefully when using our roads, wherever you are. Significant threats of flash flooding still exist.”

Prime Minister Anthony Albanese, who returned to Australia Tuesday after a week-long trip to Europe, said he would tour the affected regions on Wednesday along with Perrottet.

The latest wild storm cell – which brought a year’s worth of rain in three days to some areas – is likely to ease in Sydney from Tuesday as the coastal trough moves north, the Bureau of Meteorology (BoM) said.

But the risk of flooding could remain through the week with most river catchments already near capacity even before the latest deluge. Some regions have received 800mm (31.5 inches) of rain since Saturday, eclipsing Australia’s annual average rainfall of around 500mm (20 inches).

About 90mm (3.5 inches) of rain could fall over six hours in the state’s mid-north coast from Tuesday, reaching up to 125mm (5 inches) in some places, BoM said.

Winds up to 90 km per hour (56 miles per hour) are also forecast in several flood-hit places, raising the risk of falling trees and power lines.

Major flooding is occurring at Windsor in Sydney’s west, its third and most severe flood this year, according to the weather bureau.

Nigel Myron, a Windsor resident, said he has kept an inflatable boat ready if he had to evacuate though he is looking to move back to his place once waters recede.

“At the end of the day, what can you do? It is what it is and we dust ourselves off from the ashes and rebuild after the floods have come and gone,” Myron told ABC television.

Federal Treasurer Jim Chalmers warned the economic impact from the floods “will be substantial”.

“There’s no use tiptoeing around that … that inflation problem that we have in our economy will get worse before it gets better. It’s got a lot of sources, but this (flood) will be one of them,” Chalmers told Sky News.

The Reserve Bank of Australia flagged the floods “are also affecting some prices” as it raised its cash rate a hefty 50 basis points on Tuesday and flagged more tightening ahead to tame surging inflation.

The Insurance Council of Australia, which declared the floods a ‘significant event’, urged affected people to apply for claims, even though the full extent of damage was unknown now.