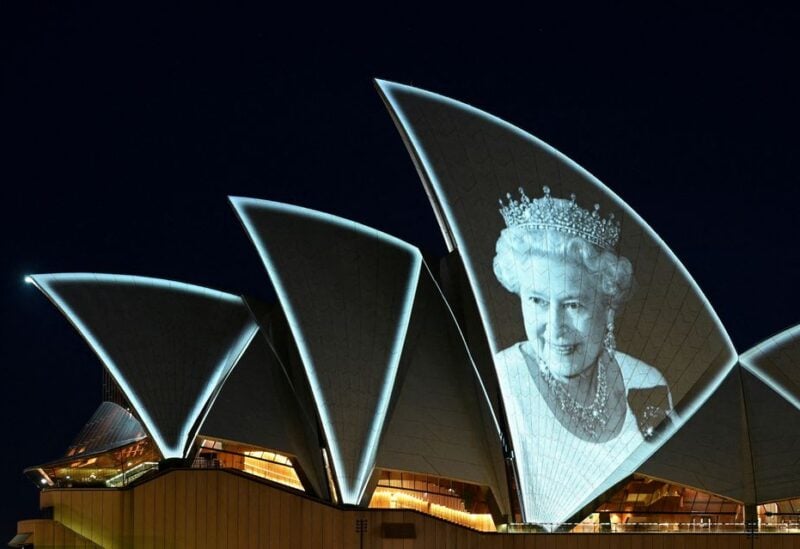 An image of Britain's Queen Elizabeth is illuminated on the sail of Sydney Opera House, following the Queen's passing, in Sydney, Australia, September 9, 2022. REUTERS/Jaimi Joy

Australia observed a national day of mourning for Queen Elizabeth II, with Prime Minister Anthony Albanese stating the finest tribute the country could provide was “a reinvigorated embrace of community service.”

A memorial event for Queen Elizabeth, who died on September 8 after 70 years on the queen, was held at Parliament House in Canberra, with 600 dignitaries in attendance. During her term as Australia’s head of state, she toured the country 16 times.

The ceremony was opened by a First Nations Elder, Aunty Violet Sheridan, who made a traditional Welcome to Country, and remembered Queen Elizabeth as a mother and grandmother.

The event took place before anti-monarchy protests organised by indigenous groups saw hundreds of people gather in the city centres of Sydney and Melbourne to mark the impact of Britain’s colonisation on First Nations people.

Albanese, who returned to Australia a day earlier after attending Queen Elizabeth’s funeral in London, noted her memory was being honoured “on a continent home to the world’s oldest continuous culture”.

Albanese supports Australia becoming a republic, but has previously said his centre-left Labor government would prioritise recognising First Nations people in the constitution, which, like any move to a republic, requires a national referendum. A referendum for a republic failed in 1999, and recent polls show opinion is divided.

In a speech at the memorial ceremony he said Australia had undergone a transformation during Queen Elizabeth’s reign. When she had first toured, Britain was Australia’s biggest trading partner and top source of migration, he said.

“That Australia, of 1954, where seven million people – 70% of the population – turned out to welcome the first sovereign to visit these shores was, in virtually every respect, a different nation in a different world,” he said.

Queen Elizabeth had taken pride in Australia’s progress and “stood with us”, he said, and Australia’s “affection held strong”.

“Perhaps the greatest tribute we can offer her family and her memory is not a marble statue or a metal plaque. It is a renewed embrace of service to community,” he said.

In Melbourne, around 600 protesters led by a group called The Warriors of the Aboriginal Resistance, marched from Flinders Street Station to the British consulate, where they rubbed red-painted hands on the wall.

“Abolish the monarchy – down with the king!” they chanted outside the consulate building.