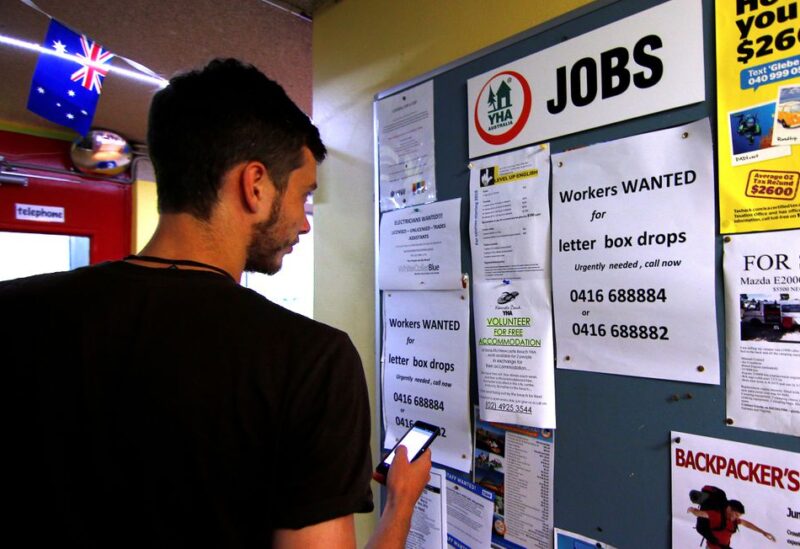 A man uses his phone to record a job add posted on a notice board at a backpacker hostel in Sydney, Australia, May 9, 2016. Picture taken May 9, 2016. REUTERS/Steven Saphore

Australia boosted its intake of permanent migrants to 195,000 this fiscal year, up 35,000 from the previous year, in an effort to assist businesses and industries dealing with widespread personnel shortages and lessen reliance on temporary employees.

The COVID-19 pandemic shut down the country’s borders for over two years, and an exodus of holiday workers and foreign students left businesses struggling to recruit staff to stay open.

“It makes no sense to bring people in, have them for a few years, then get a new cohort in to adapt to the Australian work environment,” Prime Minister Anthony Albanese told reporters on the sidelines of a government jobs summit in Canberra.

“We want people … to have a mortgage, to raise a family, to join the Australian family. Migration is part of our story.”

The increase will take effect for the current financial year ending June 2023 and will bring Australia’s immigration target largely in line with the annual cap of 190,000 that was in place between 2013 and 2019.

That level was cut by 15% to 160,000 just months before the emergence of COVID-19 in a bid to ease urban congestion. The government gave no details on numbers going forward.

Australia’s unemployment rate is now at a near 50-year-low of 3.4% but labour shortages have contributed to soaring inflation that has reduced real wages.

“COVID is presenting us, on a platter, with a chance to reform our immigration system that we will never get back again. I want us to take that chance,” Home Affairs Minister Clare O’Neil told the summit.

Australia has been competing with other developed economies, like Canada and Germany, to lure more high-skilled immigrants, with the surge in demand exacerbated by an ageing population.

Canada, last month, said it was on track to exceed its goal of granting permanent residency to more than 430,000 people this year, more than double Australia’s target, while Germany plans reforms to make itself more attractive to skilled workers.

But a blowout in visa processing times in Australia has left about a million prospective workers stuck in limbo, worsening the staff shortage crisis.

“We understand that when people wait and wait, the uncertainty can become unmanageable,” Immigration Minister Andrew Giles told the summit. “This is not good enough, and reflects a visa system that has been in crisis.”

In a bid to speed up visa processing, Giles said the government will spend A$36.1 million ($25 million) to beef up its staff capacity by 500 people for the next nine months.

“We are in a global competition for the world’s best talent and the more barriers we remove from the system the more chance we will have of attracting the best people,” said Innes Willox, Chief Executive of the Australian Industry Group.