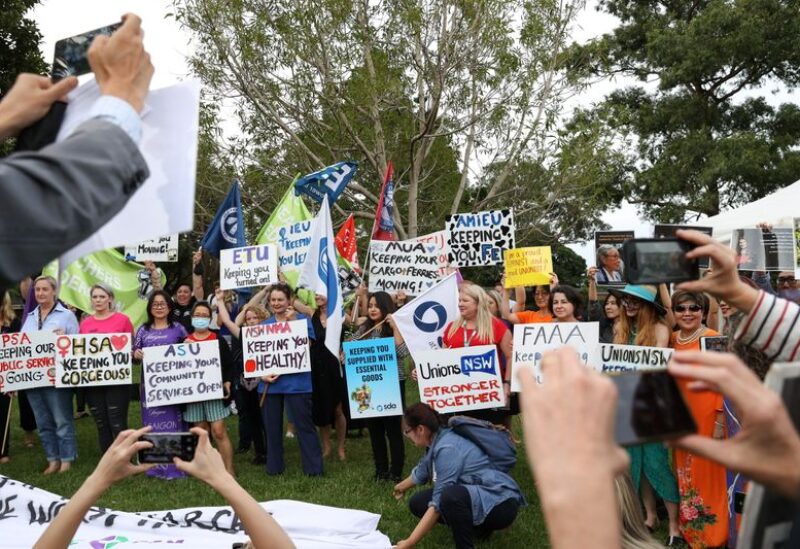 People participate in a rally for International Women's Day in Sydney, Australia, March 8, 2021.

Hundreds of mostly female workers gathered outside government buildings in Sydney to denounce violence against women and call for greater gender equality in workplaces, amid growing scrutiny over how women are being treated in Australian politics.

As they marked the International Women’s Day, a young woman stood outside the New South Wales state parliament, with the message “My body, my business” written across her body, while another lifted a placard reading “Equal work deserves equal pay!”.

Workers in various industries – from nurses and teachers to hairdressers and transport workers – participated in the gathering. It comes as the government launched a A$19 million ($14.57 million) campaign calling on people to speak up when they see women disrespected.

“Let us all work together … so that we finally move to a world where sexual violence and sexual assault and sexual harassment is a thing of the past,” Jenny Leong, a parliamentary representative from the Greens party told the crowd.

Australia’s parliament is under increased scrutiny over sexual assault allegations.

Last month, 3 female employees of Prime Minister Scott Morrison’s Liberal party announced they had been raped by the same man in 2019 and 2020. One of the alleged victims has filed a complaint with police.

Last week, Attorney-General Christian Porter, the country’s chief law officer, identified himself as the subject of a separate historical rape allegation, declared his innocence and strongly denied the claim.