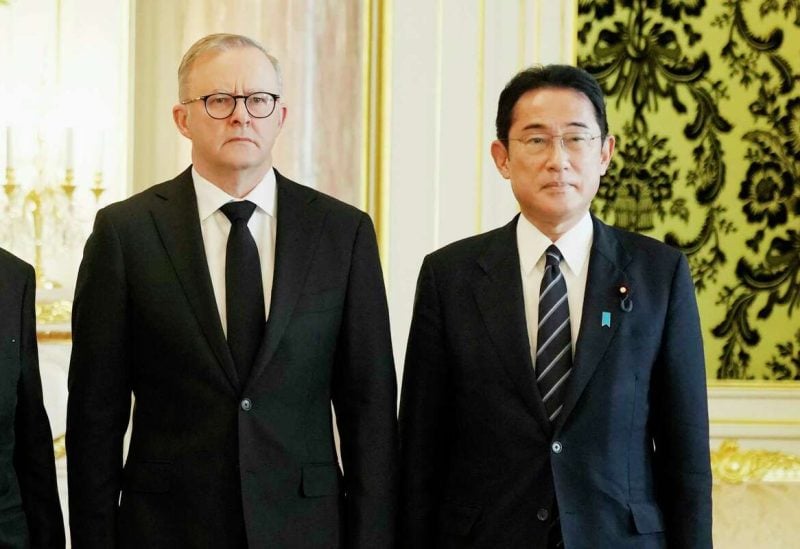 Australian Anthony Albanese, left, poses for a photo with Japanese Prime Minister Fumio Kishida before their meeting at the Akasaka Palace state guest house in Tokyo on Sept. 27, 2022. Hiro Komae/AP

Australian Prime Minister Anthony Albanese and his Japanese colleague Fumio Kishida agreed to boost security relations between the two US allies in the face of China’s desire for more influence in the Asia-Pacific region.

To adapt to a changing regional security environment, the two countries inked a security cooperation agreement at the biennial Australia-Japan Leaders’ Meeting in Perth, Western Australia.

As part of the bolstered security partnership, Albanese said Japan’s military would train and exercise in northern Australia alongside Australian Defence Force personnel.

In their fourth summit since Albanese took office in May, they said the agreement would serve “as a compass” for security cooperation for the next decade. They agreed to consult and study responses to emergencies that could affect regional security.

“Both our countries are committed to net zero by 2050,” Albanese told reporters after a signing ceremony.

Among those efforts, the leaders agreed to help build secure supply chains between the two nations for “critical minerals, including those that are required for building the green technologies of the future,” Albanese said.

As well as building a framework for secure supply chains, the partnership would promote information sharing and collaboration, including research, investment and commercial arrangements between Japanese and Australian critical minerals projects, the Australian government said in a statement.

Kishida told reporters signing the updated joint security declaration was one of the largest achievements of his visit.

“I expressed my determination that all necessary options for the defence of our country, including the so-called counterstrike capability, would become contemplated and Japan’s defence capability will be fundamentally reinforced in the next five years, which is supported by Anthony,” he said.

The Japanese leader said the two nations had been working to achieve a free and open Indo-Pacific under “an increasingly severe strategic environment”.

“Through this experience, the bonds that tie Japan and Australia together have become much stronger. And our two countries have become the central pillar of cooperation among like-minded countries,” he said.

Australia is a major supplier of iron ore, coal and gas to Japan. Locating the meeting in Perth, 3,700 km (2,300 miles) from the national capital Canberra, was meant to showcase Western Australia’s importance in supplying Japan’s energy needs, including renewable energy. The state is also a key source of beef and wheat to Japan.

“Prime Minister Albanese told me Australia intends to remain as a reliable partner and a safe investment destination. We agreed to further bolster our cooperation in the areas of energy and natural resources,” Kishida told reporters.

Stable energy supply is increasingly critical for resource-poor countries such as Japan, as Russia’s invasion of Ukraine has raised the risk of supply disruption.

Canberra and Tokyo recently bolstered security ties in response to China’s growing military strength in the region. In May, Kishida and Albanese pledged to work toward a new bilateral declaration on security cooperation.

A previous joint declaration outlined security cooperation in areas such as counter-terrorism and North Korea’s missile and nuclear weapons programmes. The two countries in 2014 elevated their relationship to a “Special Strategic Partnership”.