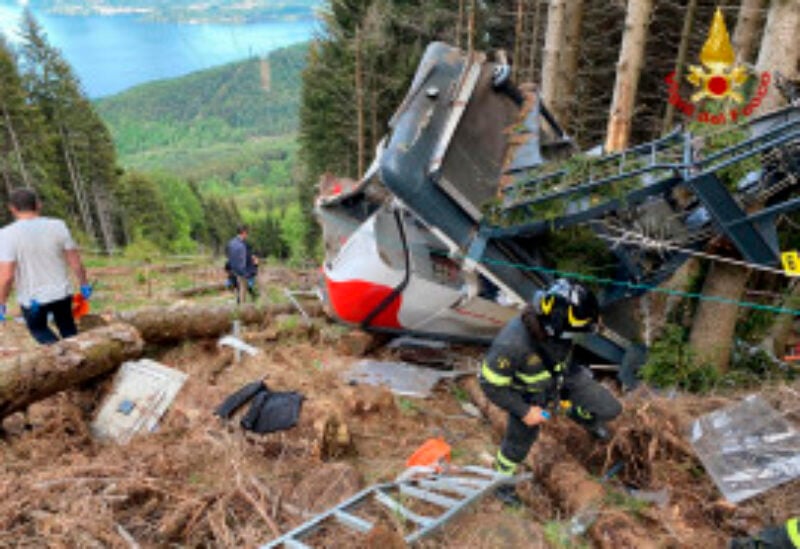 Rescuers work by the wreckage of a cable car after it collapsed near the summit of the Stresa-Mottarone line in the Piedmont region, northern Italy, Sunday, May 23, 2021. A cable car taking visitors to a mountaintop view of some of northern Italy's most picturesque lakes plummeted to the ground Sunday and then tumbled down the slope, killing at least 13 people and sending two children to the hospital, authorities said. (Italian Vigili del Fuoco Firefighters via AP)

On Monday, Victoria, Australia’s second-most populous state, said it was investigating two alleged positive COVID-19 cases in Melbourne, which, if verified, would be the state’s first community transmissions in nearly three months.

During a second wave of COVID-19 late last year, Victoria was the worst-affected Australian province, accounting for roughly 70% of total cases and 90% of deaths. The epidemic was only brought under control after one of the world’s longest and most stringent lockdowns.

Australia has avoided the high COVID-19 numbers seen in many developed countries by closing its international borders in the early stages of the pandemic, lockdowns and social restrictions. It has reported just over 30,000 cases and 910 deaths.

The report of the new likely infections come as the federal government considers a plan that would allow fully vaccinated residents to travel freely between the states if regional borders have to be closed during future COVID-19 outbreaks.

During past outbreaks states have imposed internal border closures and mandated 14-day quarantine for visitors.

“As the vaccine rollout progresses, we can give greater certainty to Australians in terms of what being vaccinated delivers for them by way of benefits across the country,” Finance Minister Simon Birmingham told ABC Radio on Monday.

Officials hope the vaccination and travel plan will prompt many Australians to get vaccinated. Australia’s vaccination drive has missed initial dosage targets and lags many nations.

Many Australians are hesitant or delaying getting vaccinated because of the country’s success in stamping out the coronavirus.

The vaccine rollout has accelerated in recent weeks, with roughly a third of the 3.6 million cumulative shots administered in the last three weeks, but still falling short of the 4 million pledged by March 31.

Morrison, on the other hand, will present his travel exemption proposal to the national cabinet – a coalition of federal and state government officials – next week, according to a story in the Australian newspaper on Monday, which did not cite any sources.