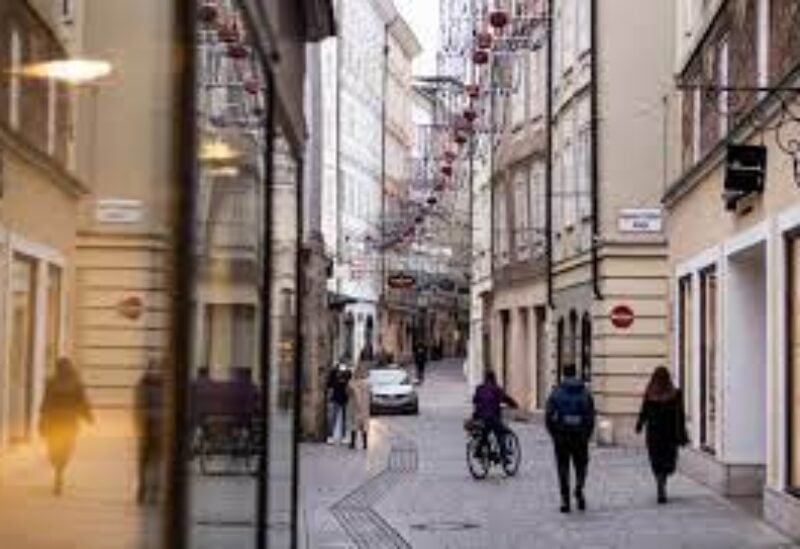 Austria went into its fourth national lockdown on Monday, after tens of thousands of people, many of them far-right supporters, protested in Vienna against new restrictions on movement as Europe became the epicenter of the coronavirus pandemic.

The Austrian government also announced that vaccinations would be mandatory beginning Feb. 1 in a country where many people are skeptical of immunizations, a viewpoint supported by the far-right Freedom Party, the third largest in parliament.

On Monday, the streets of Vienna were quieter than usual, with cafe terraces empty and most shops closed.

About 40,000 people protested peacefully in Austria’s capital on Saturday, with only six arrests. But protests against the re-imposition of restrictions meant to contain COVID-19 contagion spreading anew turned violent in Belgium and the Netherlands over the weekend.

Stock markets kicked off the week on a cautious note after posting a second consecutive weekly drop, and the euro struggled as traders weighed the risks of new lockdowns.

“The problem in Europe is the spread of COVID-19 which means that more lockdowns and other health restrictions partly against the non-vaccinated should rapidly increase in the next two weeks,” said Sebastian Galy, a strategist at Societe Generale.

“That in turn should have a negative impact on some services and impact negatively growth, a scenario that had been ever more priced into the European equity market.”

Roughly 66% of Austria’s population is fully vaccinated against COVID-19, one of the lowest rates in western Europe.

Restaurants, cafes, bars, theatres, non-essential shops and hairdressers cannot open their doors for 10 days, and maybe as many as 20, the government says.

Christmas markets, a huge draw for tourists that had only just begun to open, must also close but, in a last-minute change, Austrian ski lifts can remain open to the vaccinated.

Hotels will, however, close to tourists not already staying there when the lockdown began.

“It is a situation where we have to react now,” Health Minister Wolfgang Mueckstein told ORF TV on Sunday night.

“A lockdown, a relatively tough method, a sledgehammer, is the only option to reduce the numbers (of infections) here.”

The conservative-led government imposed a lockdown on the unvaccinated last week but daily infections kept extending far above the previous peak, given continued vaccine scepticism as winter draws in, driving more people indoors.

Riots broke out in cities across the Netherlands on Sunday, the third night in a row that police clashed with mobs of angry youths who set fires and threw rocks to protest at COVID-19 restrictions.

Police and protesters clashed in the streets of Brussels on Sunday, with officers firing water cannon and tear gas at demonstrators throwing rocks and smoke bombs, witnesses said.

In many parts of Germany, including its capital Berlin, Christmas markets opened for the first time in two years on Monday even as the COVID-19 infection rate reached a fresh record.

But states bordering Austria and the Czech Republic that have by far Germany’s highest case numbers have introduced stricter rules including cancelling Christmas markets, barring the unvaccinated from restaurants and bars, and nighttime curfews.