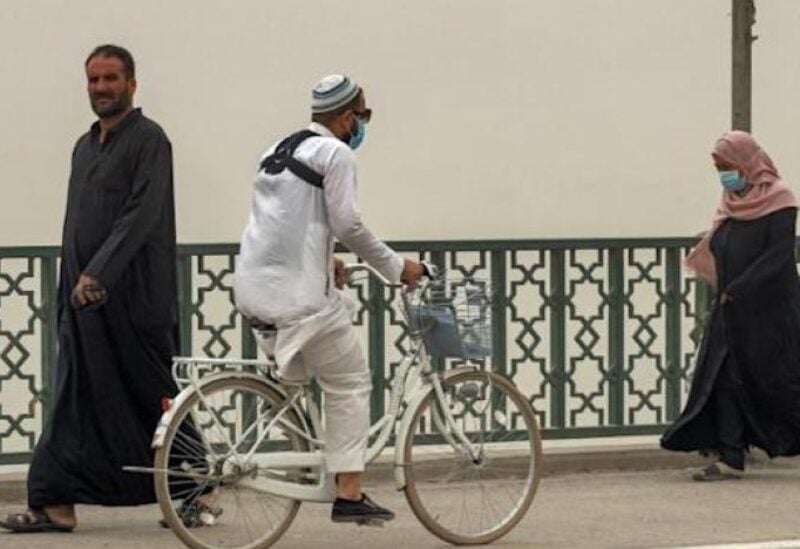 A man rides a bicycle along the Sinek bridge spanning the Tigris river in Iraq's capital Baghdad during a severe dust storm on April 20, 2022 AHMAD AL-RUBAYE AFP

The air in Baghdad was thick with a heavy sheet of grey and orange dust, while INA cited the meteorological office as saying the latest storm was expected to lift on Thursday.

Flights were suspended at Baghdad International Airport due to poor visibility.

The airport serving the city of Najaf to the south also released a statement announcing flights were grounded.

“The dust is affecting the whole country but particularly central and southern regions,” Amer al-Jabri, an official at Iraq’s meteorological office, told AFP.

“Iraq is facing climatic upheaval and is suffering from a lack of rain, desertification and the absence of green belts” around cities, he said.

Experts have said these factors threaten social and economic disaster in the war-scarred country.

In November, the World Bank warned that Iraq could suffer a 20-percent drop in water resources by 2050 due to climate change.

In early April, environment ministry official Issa al-Fayad had warned that Iraq could face “272 days of dust” a year in coming decades, according to the state news agency INA.

The ministry said the weather phenomenon could be confronted by “increasing vegetation cover and creating forests that act as windbreaks”.