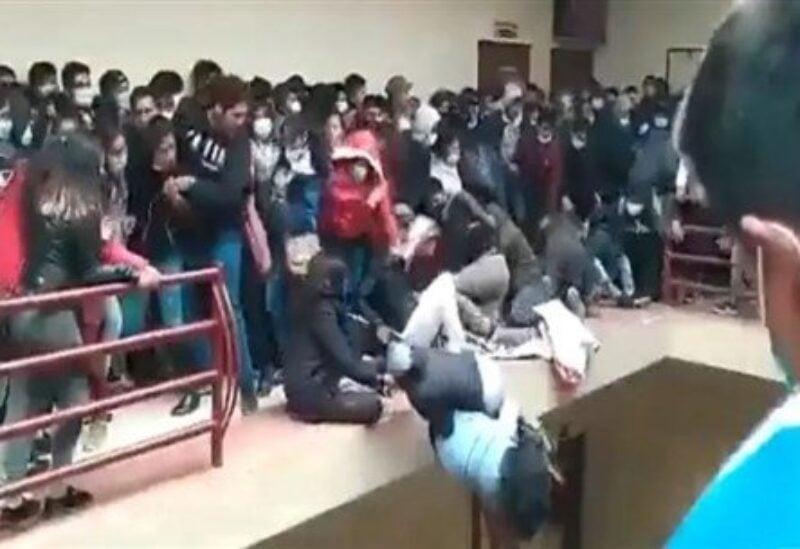 Shweta Sharma wrote this article in The Independent:

Video footage has captured the tragic moment when students thronging the fourth floor balcony of a university in Bolivia plummeted to their deaths after the railing gave way.

Seven students were killed and five others injured at the Public University of El Alto, second-largest city in Bolivia. The incident occurred as dozens of students crammed onto the balcony to enter a lecture hall for an assembly on Tuesday.

The disturbing video footage, captured by a bystander moment before the students fell, shows them jostling while leaning against the railing which collapsed due to the pressure of the crowd. A number of them then went crashing down to the concrete floor while a few were pulled up by those still on the balcony.

A student in blue jacket was saved by other students as she dangled upside down as her colleagues grab her shoes to rescue her.

An investigation has been ordered into the incident and the woman who was rescued would be questioned to find details.

Those dead and injured are aged between 20 to 27.

“From this accident, seven have died and five are in a critical state, some of them stabilized,” Health Minister Jayson Auza said.

“Our deepest condolences to the people of El Alto and to the suffering families. We await the prompt clarification of the facts,” Bolivian President Luis Arce said on Twitter.

The bodies have been handed over to the families without delay for last rights, the police said.