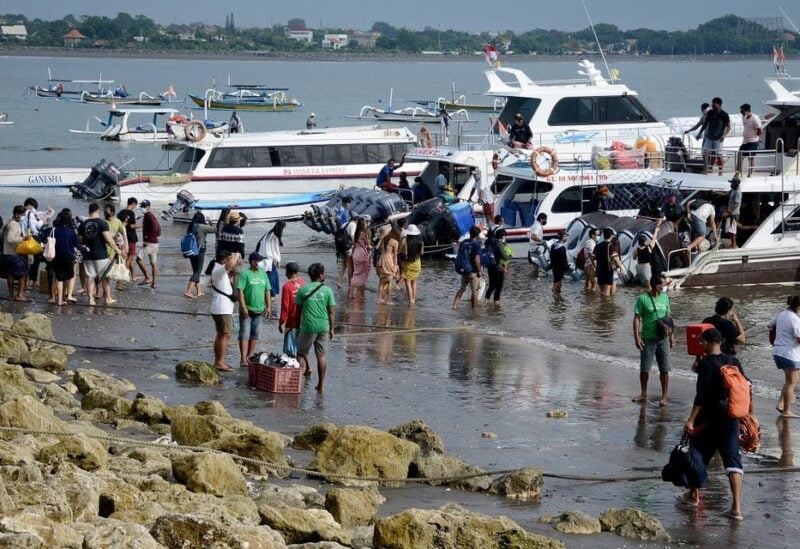 This picture taken on January 7, 2021 shows tourists preparing to board a fast boat from Sanur beach near Denpasar on Indonesia's resort island of Bali. (Sonny Tumbelaka/AFP)

Several foreign tourists were kicked out of Bali Monday for breaking the Indonesian holiday island’s stricter coronavirus rules, as the country is slammed by its deadliest COVID-19 wave.

Three visitors from the United States, Russia and Ireland were put on planes bound for their home countries after being nabbed for not wearing masks in public, violating Bali’s new zero-tolerance policy, authorities said.

A Russian woman who refused to self-quarantine after testing positive was also set to be deported once she was virus-free, he added.

The four are the first foreigners to be deported for breaking Bali’s stricter Covid-19 rules as the beach-dotted island clamps down on rampant violations.

The restrictions are part of tighter virus curbs that Indonesia rolled out last week in Bali as well as its hard-hit capital Jakarta and across densely populated Java where skyrocketing new infections have overwhelmed hospitals.

On Monday, Southeast Asia’s worst-hit country reported a record 40,427 new infections and 891 deaths in the last 24 hours.
Indonesia’s tighter restrictions were to last until at least July 20.

Bali has been less affected than some other parts of Indonesia, but new infections and deaths are on the rise. The island has reported a total of nearly 56,000 cases and 1,648 deaths.

Tourist-dependent Bali, which used to attract millions of foreign visitors annually, rolled out an aggressive vaccination plan as it geared up for a now-shelved bid to reopen to mass tourism this month.