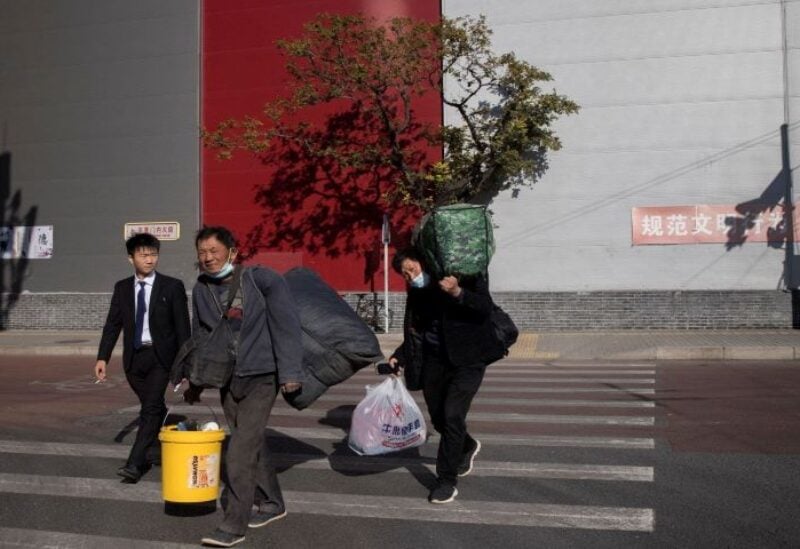 Workers and a businessman cross a street during morning rush hour following an outbreak of the coronavirus disease (COVID-19) in Beijing, China

Beijing city authorities set tighter restrictions on conferences and gatherings after confirming six locally transmitted COVID-19 cases on Thursday, including individuals who had attended conferences in person in the city.

In the current outbreak, which has resulted in over 1,000 local cases since mid-October, Beijing has recorded fewer than 50 COVID-19 local symptomatic infections, but has taken aggressive measures to restrict potential pathways of future transmission under China’s zero-tolerance policy. In addition, the city will host the Winter Olympics in February.

The capital city has already sealed off some residential compounds and businesses deemed of higher risk, delayed its annual marathon, and demanded fewer activities such as wedding banquets and exhibitions.

“Conferences and events should be held via video whenever possible, and the size of offline events should be minimised,” Pang Xinghuo, vice director at the Beijing Center for Disease Prevention and Control, said at a news briefing on Thursday.

Participants of offline conferences should be managed in a “closed loop”, meaning they should not leave the venue for other group gatherings or meals and should avoid taking public transport, Pang said.

Offline event organisers should verify participants’ COVID test results and check whether they have visited areas with clusters, she said.

China’s state-controlled energy giant China National Petroleum Corporation (CNPC) said on Thursday that it had closed an office building and a few facilities in Beijing, after some employees tested positive for the virus.

CNPC, parent of PetroChina, also told staffers who were not present in the closed building to be quarantined at home for a week and work remotely.

As of Nov. 10, mainland China had reported 98,001 COVID-19 cases with confirmed symptoms, including locally transmitted cases and those who arrived from abroad, and 4,636 deaths in total.