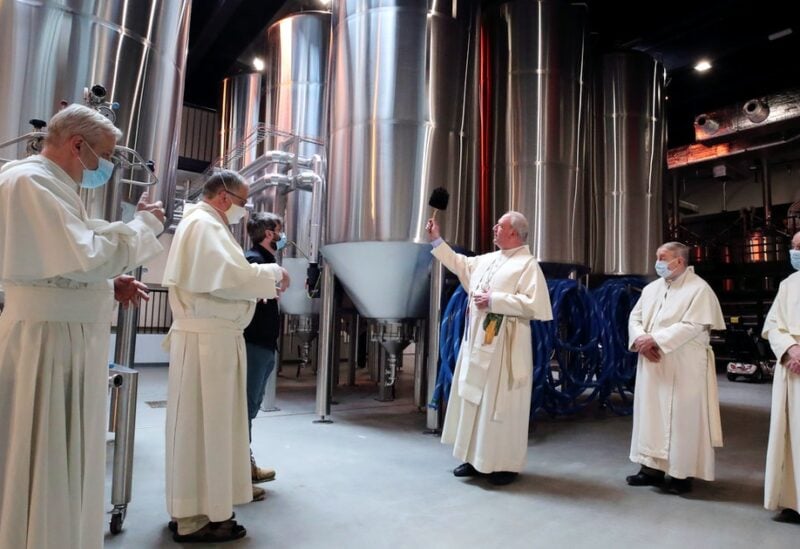 For the first time in more than two centuries, the priests of Belgium’s Grimbergen Abbey have started brewing, with a microbrewery producing limited quantities of the mass-market beer bearing their abbey’s name.

The abbey, whose emblem is a phoenix with the Latin motto “Ardet nec consumitur” (Burned but not destroyed), was burned down and looted twice by French troops in 1798, putting an end to a 12-century beer-making history.

Beer-making was a “second life” for Belgian abbeys, according to Karel Stautemas, a white-robed abbey sub-prior who is about to conclude his brewing studies, and the community of 15 Norbertine canons was pleased to see it return.

“The major business was religion, but brewing was vital because water was not drinkable at the time in the Middle Ages, and it was also a form of payment,” he explained.

Since 1958, when local manufacturer Maes paid the monks to use the Grimbergen name and phoenix emblem on its “abbey beer,” the abbey, which was founded in 1128, has been linked to commercial brewers. Carlsberg of Denmark now owns the global rights.

The new microbrewery aims to combine the 900-year tradition of beer making, evident in books in the abbey’s library, with new techniques and innovation. To celebrate the opening on Thursday, it is releasing three new Grimbergen beers.

Marc-Antoine Sochon, a brewmaster from Carlsberg overseeing the 10,000 hectolitre-per-year facility, said one of the new beers drew on a tradition from the Middle Ages to use smoky malt.

“I think that’s the objective,” he continued, “to do trials, tests, and try new things with raw materials, little quantities.”

The abbey has planted hops and herbs in its garden in order to focus on using local crops, after unearthing an old cow bone used to clear beer in the plot.

Even if they are not a Trappist order, Grimbergen’s monks will follow the requirements of Belgium’s Trappist beer manufacturers, which require them to brew within the abbey walls, oversee the operation, and direct revenues toward abbey upkeep and charitable causes.