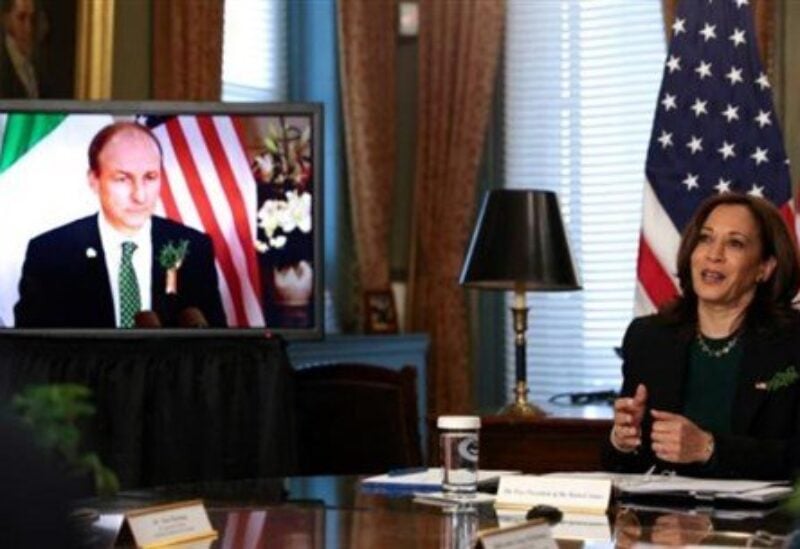 The Biden administration will not take sides in a British-European Union rift over the movement of goods to Northern Ireland, a senior U.S. official said ahead of a meeting between President Joe Biden and Irish Prime Minister Micheál Martin.

Martin met virtually with U.S. Vice President Kamala Harris, who underscored what she called America’s “steadfast and strong” commitment to Ireland and the two allies’ shared interest in addressing climate change and the coronavirus pandemic.

“In the midst of global freedoms being in decline, our nations remain close because we are committed to democracy,” Harris said in her ceremonial office, which was adorned with a large shamrock-type plant in honor of St. Patrick’s Day.

Fountains ran green at the White House on Wednesday, continuing a tradition that dates back to the administration of former President Barack Obama. Later Wednesday, the entire White House will be illuminated in green in honor of the traditional Irish holiday.

“The key objective is of course to deepen our relationship,” Martin told MSNBC. “In President Biden, we have the most Irish-American president since John F. Kennedy, and his election was greeted with great affection and warmth in Ireland.”

The meeting comes amid simmering disputes related to the implementation of agreements put into place as the UK exited the EU.

Among key concerns is the Northern Ireland protocol, which governs the movement of goods into the British-ruled province.

The dispute has raised tensions in the region, more than two decades after a 1998 peace deal largely ended three decades of violence between mostly Protestant unionists, who want Northern Ireland to stay in the UK, and mostly Roman Catholic nationalists looking to unite the Irish Republic and Northern Ireland.

“The U.S. government has welcomed provisions in both the EU-UK Trade and cooperation agreements, as well as the Northern Ireland protocol, which we believe helps protect the gains of the Belfast Good Friday Agreement,” said the senior Biden administration official, who declined to be named, previewing the president’s comments to reporters.

The aide added: “The U.S. administration is not looking to take sides in this disagreement.”

Martin has said Ireland, an EU member, is counting on U.S. support to help maintain the political stability of Northern Ireland.

Earlier this month, Northern Irish loyalist paramilitary groups said they were temporarily withdrawing support for the 1998 peace agreement due to concerns over the Brexit deal.

The groups expressed concern about a disruption to trade between Britain and Northern Ireland due to the deal and said they believed that Britain, Ireland and the EU had breached their commitments to the peace deal.

No decision has been made on the U.S. appointment of a special envoy to deal with Northern Ireland, the U.S. official said.

The virtual meeting with Martin will be the first bilateral event with Ireland hosted by Biden, who attended a St. Patrick’s Day Mass at his church in Delaware before heading back to Washington. Biden is expected to make a trip to Ireland as soon as this summer.

Martin will also participate virtually in the annual U.S. congressional luncheon marking Ireland’s national day and the close ties between the two countries.