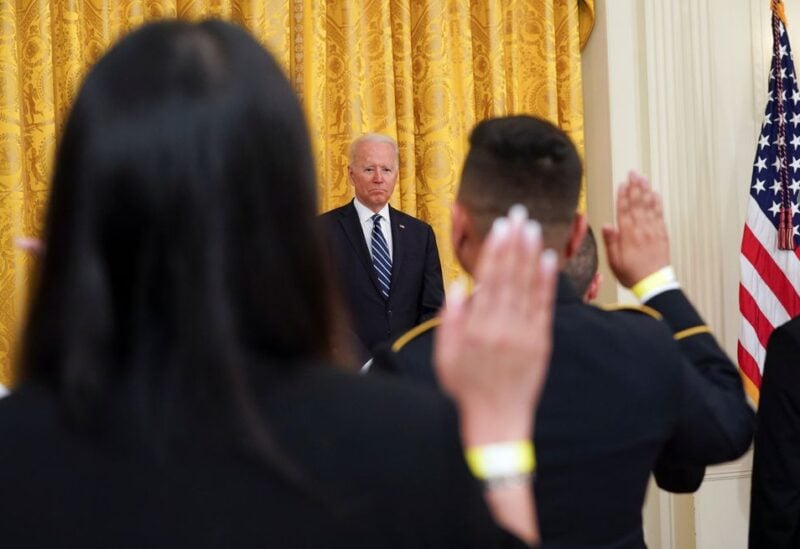 U.S. President Joe Biden watches as hands are raised for the Oath of Allegiance during a naturalization ceremony at the White House in Washington, U.S., July 2, 2021. REUTERS/Kevin Lamarque

President Joe Biden celebrated new U.S. citizens at an event at the White House on Friday, the same day his administration rolled out a government-wide strategy to encourage more immigrants to become citizens.

“It’s dreams of immigrants like you that built America and continued to inject new energy, new vitality, new strength,” Biden said in the East Room, thanking the 21 naturalized Americans for choosing the United States as their home.

“We’ve seen that most clearly during this pandemic, with immigrants as frontline workers and as scientists and researchers on the front lines of finding vaccines,” he said at the ceremony with the group, who hailed from 16 countries and included several members of the U.S. military.

Under the plan released by U.S. Citizenship and Immigration Services (USCIS) on Friday, U.S. border authorities could be asked to hand out information about naturalization to permanent residents entering at ports of entry.

The strategy of encouraging citizenship, called for by Biden in a February executive order, stands in contrast to former President Donald Trump’s attempts to reduce both legal and illegal immigration into the United States.

Biden’s immigration bill released earlier this year would provide a path to citizenship for the estimated 11 million immigrants living in the United States illegally. However, the bill has failed to gain traction in Congress.

Biden, who proudly notes he is descended from Irish immigrants, now backs a narrower set of initiatives that enjoy more bipartisan support, including resolving the status of people brought to the country as children.

“We need an immigration system that reflects our values and upholds our laws,” Biden said at the event. “We can do both.”