Biden heads to Middle East for first tour as US President 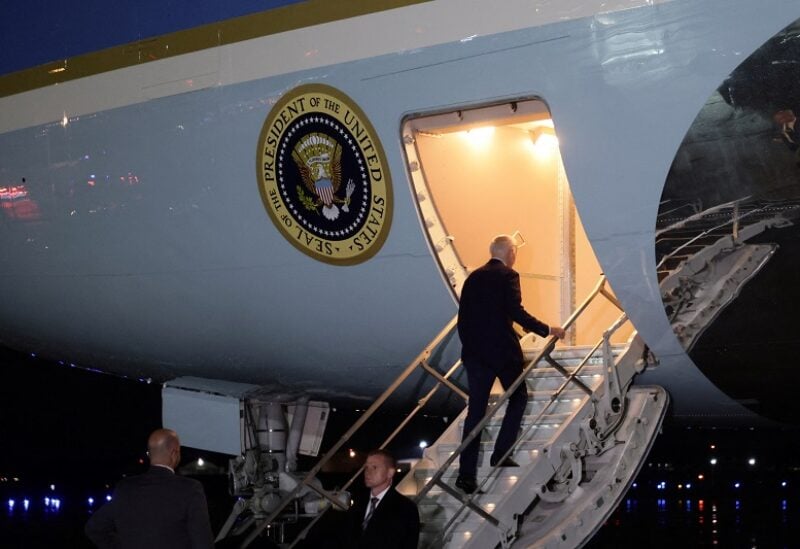 U.S. President Joe Biden departs for his first trip as president to the Middle East where he will visit Israel, the occupied West Bank and Saudi Arabia, at Joint Base Andrews, Maryland, U.S., July 12, 2022. REUTERS/Evelyn Hockstein

Before heading to Saudi Arabia, US President Joe Biden lands in the Middle East on Wednesday for a trip that will see Israeli leaders urge tougher action against Iran.
The 79-year-old president will meet Israeli leaders seeking to broaden cooperation against Iran, and Palestinian leaders frustrated by what they describe as Washington’s failure to curb Israeli aggression.

The persistent frustrations of Israeli-Palestinian diplomacy are nothing new for Biden, who first visited the region in 1973 after being elected to the Senate.

Iran and Israel were allies then, but the Jewish state now considers Tehran its top threat.

Israel’s caretaker Prime Minister Yair Lapid, who took office less than two weeks ago, has said talks “will focus first and foremost on the issue of Iran.”

Moments after Biden touches down, Israel’s military will show him its new Iron Beam system, an anti-drone laser it claims is crucial to countering Iran’s UAV fleet.

Israel insists it will do whatever is necessary to thwart Iran’s nuclear ambitions, and is staunchly opposed to a restoration of the 2015 deal that gave Tehran sanctions relief.

Israel says it is raising 1,000 flags across Jerusalem to welcome the US leader, who has not reversed former president Donald Trump’s controversial decision to recognize the city as the capital of the Jewish state.

Palestinians claim Israeli-annexed east Jerusalem as their capital and, ahead of the visit, have accused Biden of failing to make good on his pledge to restore the United States as an honest broker in the conflict.

“We only hear empty words and no results,” said Jibril Rajoub, a leader of the secular Fatah movement of Palestinian president Mahmud Abbas.

Biden will meet Abbas in the occupied West Bank city of Bethlehem on Friday, but there is no expectation of bold announcements toward a fresh peace process, meaning the visit may merely deepen Palestinian frustration.

Israel is also mired in political gridlock ahead of elections on Nov. 1, the fifth vote in less than four years.

US-Palestinian ties have recently been strained by the May killing of prominent Al Jazeera reporter Shireen Abu Akleh while she was covering an Israeli army raid in the occupied West Bank.