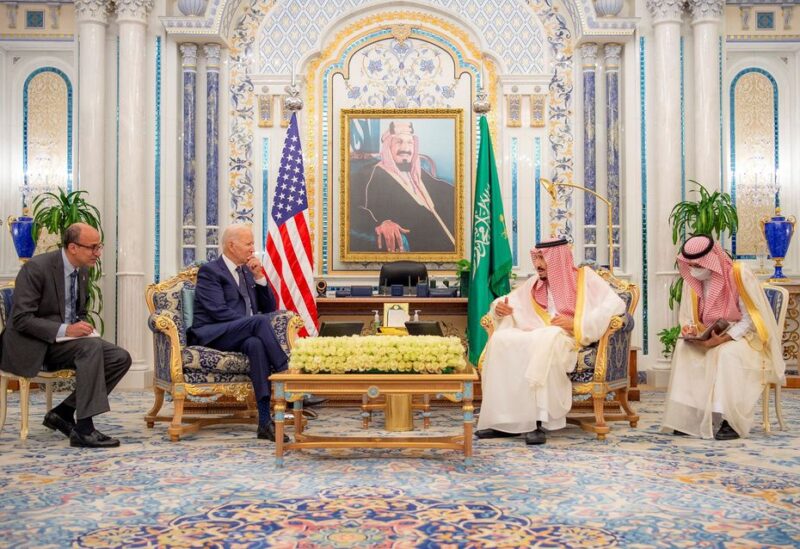 Joe Biden, the president of the United States, meets with Arab leaders in Saudi Arabia on Saturday in an effort to urge Washington’s Gulf allies to increase oil production and include Israel in the area as part of a new axis partly motivated by shared concerns over Iran.

During the second leg of his first Middle East trip as president, Biden has downplayed meeting with Saudi Crown Prince Mohammed bin Salman, a decision that has drawn criticism in the US due to human rights abuses. Instead, he has concentrated on the summit with six Gulf states, Egypt, Jordan, and Iraq that is scheduled.

Biden had promised to make Saudi Arabia a “pariah” on the global stage over the 2018 murder of journalist Jamal Khashoggi by Saudi agents, but ultimately decided U.S. interests dictated a recalibration, not a rupture, in relations with the world’s top oil exporter and Arab powerhouse.

Biden needs Saudi help at a time of high crude prices and other problems related to the Russia-Ukraine conflict and as he encourages efforts to end the Yemen war, where a temporary truce is in place. Washington also wants to curb Iran’s sway in the region and China’s global influence.

The U.S. president will hold bilateral talks with the leaders of Egypt, the United Arab Emirates and Iraq before taking part in the wider summit where he will “lay out clearly” his vision and strategy for America’s engagement in the Middle East, U.S. national security adviser Jake Sullivan said on Friday.

“He’s intent on ensuring that there is not a vacuum in the Middle East for China and Russia to fill,” Sullivan said.

Biden will discuss energy supplies with Gulf oil producers, but Washington said it does not expect OPEC heavyweight Saudi Arabia to boost oil output immediately and will await the outcome of an OPEC+ meeting on Aug. 3.

Gulf states, who have refused to side with the West against Russia in the Ukraine conflict, are in turn seeking a concrete commitment from the United States to strategic ties that have been strained over perceived U.S. disengagement from the region.

Riyadh and Abu Dhabi have been frustrated by U.S. conditions on arms sales and for being excluded from indirect U.S.-Iran talks to revive a 2015 nuclear pact that they see as flawed for not tackling regional concerns about Tehran’s missile programme and behaviour.

“The most important demand from the Saudi leadership and other Gulf leaders — and Arabs in general — is clarity of U.S. policy and its direction towards the region,” said Abdulaziz Sager, chairman of Riyadh-based Gulf Research Center.

Israel, which shares their concerns over Iran, encouraged Biden’s trip to the kingdom, hoping it would foster a warming between Saudi Arabia and Israel as part of a wider Arab rapprochement after the UAE and Bahrain forged ties with Israel in U.S.-brokered pacts that received Riyadh’s blessings.

In a sign of progress under what Biden described as a groundbreaking process, Saudi Arabia said on Friday it would open its airspace to all air carriers, paving the way for more overflights to and from Israel.

Washington and Riyadh also announced the removal of U.S. and other peacekeepers from Tiran — an island between Saudi and Egypt in a strategic position leading to the Israeli port of Eilat. The troops have been stationed as part of accords reached in 1978 and which led to a peace deal between Israel and Egypt.

The U.S.-Arab summit would discuss “tighter coordination and collaboration when it comes to Iran,” Sullivan said, as well as regional integration, including that of Iraq, where Tehran has built deep influence. Support by wealthy Gulf states for global infrastructure and investment will also be discussed.

The United States and Israel are also seeking to lay the groundwork for a security alliance with Arab states that would connect air defence systems to combat Iranian drone and missile attacks in the Middle East, sources have said.

Such a plan would be a hard sell for Arab states that do not have ties with Israel and balk at being part of an alliance seen as against Iran, which has built a strong network of proxies around the region including in Iraq, Lebanon and Yemen.

Senior Emirati official Anwar Gargash said on Friday the idea of a so-called Middle East NATO was difficult and that bilateral cooperation was faster and more effective.

The UAE, he said, would not back a confrontational approach: “We are open to cooperation, but not cooperation targeting any other country in the region and I specifically mention Iran.”