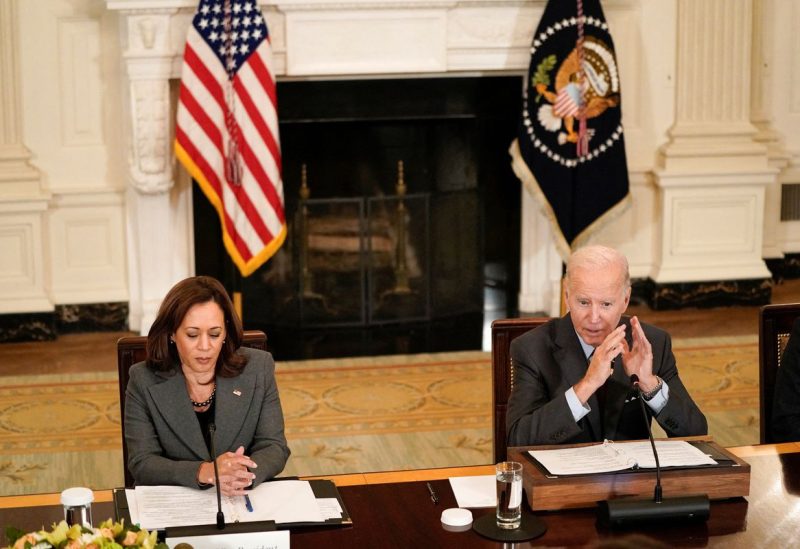 Biden appeared alongside Vice President Kamala Harris at a $1 million fundraiser in Pennsylvania, a key battleground state, taking aim at oil companies and “big pharma” for making huge profits on the backs of Americans.

“Enough is enough is enough,” Biden told supporters in Philadelphia. “Every person of good conscience needs to clearly and unambiguously stand up against the violence in our politics, regardless of what your politics are.”

“Democracy is literally, not figuratively, on the ballot this year,” said Biden, who warned about the dangers of extremism in an impassioned speech in Philadelphia last month.

Biden said reports indicated the attack on Paul Pelosi was aimed at Speaker Pelosi, and noted that the hammer-wielding assailant used the same chant – “Where’s Nancy” – heard from supporters of former President Donald Trump when they stormed the Capitol on Jan. 6.

It was not surprising that one party’s repeated lies about stolen elections could affect “people who may not be so well-balanced,” Biden told the Pennsylvania Democratic Party’s annual Independence Dinner, a major state party event.

The crowd greeted Biden with a standing ovation but he drew the most raucous cheers when he showed off his Phillies socks on stage, a sign of support for Philadelphia’s baseball team in its bid to win the sport’s championship World Series.

The speech is part of big push by top Democrats to boost Pennsylvania Democrats in the closing stretch ahead of the Nov. 8 midterm election. Polls suggest Democrats could lose Democrats could lose control of both houses of Congress, with voter discontent over high inflation spoiling momentum Democrats had hoped to win from the fight over abortion rights.

Biden and Harris’s visit, Biden’s 19th to the crucial battleground state of Pennsylvania since taking office last year, comes with less than two weeks to go before Election Day.

“I absolutely do believe that John Fetterman will win this election,” Harris told reporters ahead of a speech in Philadelphia.

Allies tried to do damage control this week after Fetterman’s shaky debate performance against Oz on Tuesday that showed the struggle the Democrat faces in recovering from a May stroke.

“I may not always say everything perfectly, but I’ll always do the right things if you send me to Washington, D.C.,” Fetterman said in Philadelphia on Friday.

Biden also drew a sharp contrast between his economic plans and those of the so-called MAGA Republicans – referring to Trump’s “Make America Great Again” slogan – on issues ranging from prescription drug costs to Social Security.

He noted prices at the gas pumps had come down from summer peaks, and said more progress could be made if energy companies bring lower prices to “reflect what they pay for a barrel of oil.”

“Look, those excess profits are going back to the shareholders and their executives instead of going to lower prices to at pump and give relief to the American people,” Biden said.

Trump, Biden’s 2020 election opponent potential 2024 adversary, is expected to campaign in Pennsylvania next weekend as well.