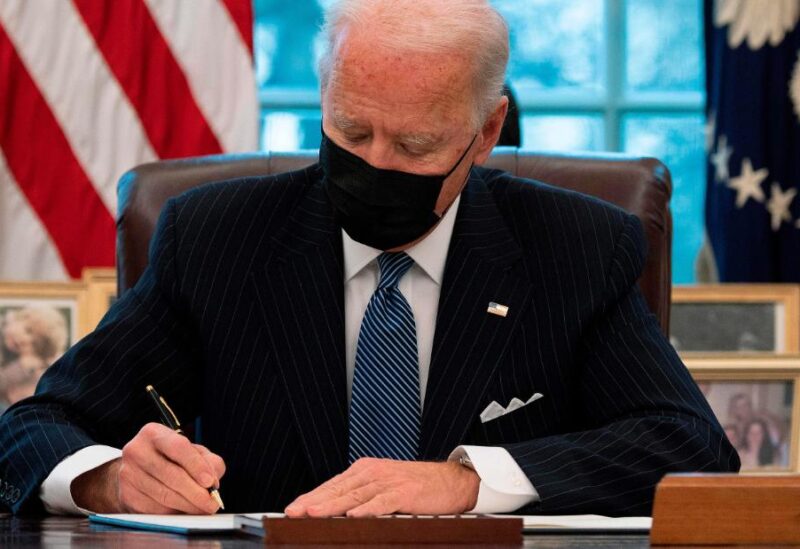 Maritza Hernández arrived tired in this small Guatemalan village with two young children in tow and over a thousand miles to ride. She was inspired by a clear – if not entirely true – tale.

“I learned they’re letting kids in,” Hernández said, adding that she wanted to cross the Texas border and seek asylum.

In February, the number of immigrant families arrested by US border agents nearly tripled from a month earlier, to about 19,000 people. Their flight is fueled by hunger and poverty. So is the misinformation that the US border is now wide open, which has spread through social media and through word of mouth.

Reuters spoke with nearly two dozen migrants and more than a dozen smugglers, as well as analyzing hundreds of posts in closed Facebook groups where these “coyotes” advertise their services. The investigation debunked widespread misconceptions about U.S. President Joe Biden’s immigration policy reforms.

“There’s 100 days of free passage across the border,” a Guatemalan smuggler told Reuters.

The truth is much more complex.

The strategy of returning most southern border crossers to Mexico, which was introduced by former President Donald Trump a year ago, is still being enforced by US Customs and Border Protection (CBP). According to CBP data, about 70,000 individuals, or 72 percent of such migrants – mostly single adults – were deported quickly in February alone. As the recidivism rate has risen, some of those individuals were most likely repeat offenders.

“Don’t come over,” Biden said in a March 16 interview with ABC News when asked to articulate his message to hopefuls. “Don’t leave your town or city or community.”

Still, it’s true that more migrants – mainly children and families – have been allowed to enter the United States in the early days of his administration than in the final days of Trump’s. In February, more than half of the family members caught with children at the border were not expelled. Many have been released from CBP custody into the United States as they await asylum hearings.

Their success has supercharged migrant and smuggler communication channels, with many now urging travelers to head north before the door slams shut, said Andrew Seele, president of the Miration Policy Institute, a nonpartisan Washington-based think tank.

“Smugglers can definitely exaggerate things and make up information, but they can’t completely sell what doesn’t exist,” Seele said.

Since January, the State Department has placed more than 28,000 radio ads in Spanish, Portuguese and six indigenous languages on 133 stations in Guatemala, Honduras, El Salvador and Brazil, and it has worked with Facebook and Instagram to create advertisements to dissuade migrants, according to the department and the White House.

Whether it works remains to be seen. Trump’s anti-immigration message was loud and clear. Yet on his watch in February 2019, U.S. border agents encountered more than 40,000 people traveling in family groups, about twice as many as the Biden administration saw last month, according to CBP figures.

The business of moving migrants is booming in the hamlet of La Técnica, deep in a Guatemalan rainforest, where Hernández and her two children stopped to rest.

In early March, Reuters witnessed motorized canoes whisking hundreds of U.S.-bound migrants across the Usumacinta River to the area’s unguarded border with Mexico.

Carlos, a smuggler who gave only his first name, chatted by phone with a colleague in the Mayan language Q’eqchi’ about an impending arrival. This transportation crossroads is also an information hub where news – both true and fake – spreads rapidly.

“Supposedly the president is letting children in,” Carlos said of Biden.

Carlos had it partly right. Biden, in a shift from the previous administration, said he would not turn away “unaccompanied minors” – kids crossing the border without parents or legal guardians. These children can now enter the United States to pursue asylum claims, in accordance with U.S. law.

The new administration has done the same for some migrant families along a limited, 230-mile stretch of the border between Texas and the Mexican state of Tamaulipas. That shift came in early February after Tamaulipas refused to continue allowing U.S. border officials to expel back into the state Central American families with children under the age of six. Biden has said his team is working to convince Mexico to take more of those families back.

Much of this nuance has been lost in Central America, a region desperate for an escape valve. Migrants are being driven by gang violence and poverty that has been exacerbated by job losses from the COVID-19 pandemic.

The situation is particularly dire in Honduras, where hurricanes Eta and Iota last November destroyed tens of thousands of homes. Nearly a third of the country’s population is now beset by a worsening hunger crisis, according to a government report published in February.

Hernández, who hails from the Honduran coastal state of Colón, said the storms wiped out the family’s chickens and inundated the farm fields where her husband worked. In February, she defied her spouse and set off for Texas with her two children, encouraged by news of other families successfully crossing the border.

The U.S. government radio spots warn migrants against such a journey. In an ad currently broadcast in Honduras, a man named “Jorge” advises “Rosita” that she could be “assaulted, kidnapped, abandoned or infected with coronavirus” – and would likely be detained or deported if she reached the United States.

But other U.S.-based sources are fueling the myth of an open border. Texas-based citizen journalist Luis Rodriguez, who was born in Honduras, has posted several videos for his 400,000 Facebook followers encouraging migrant families to capitalize.

“How long will this last? Well, no one knows,” he said in a March 7 video.

Some high-profile Republicans, too, are sending the message via prominent news outlets that crossing is easy. In a March 21 interview on “Fox News Sunday,” U.S. Senator Tom Cotton of Arkansas said “the border right now is wide open.”

Back in La Técnica, migrant Enrique Gallean shouted a warning to families gathered on the dock as he stepped off one of the rare boats bearing migrants back into Guatemala.

“They’re not letting children in!” he said.

Clutching his 8-year-old son’s hand, the Honduran native told Reuters he had recently crossed the U.S. border near Roma, Texas, and surrendered himself to CBP in the hopes of being allowed to pursue asylum. Instead, Gallean said, they were rapidly expelled to Mexico.

It was much the same for Hector Ruiz. A resident of El Salvador, he and his wife and three young children passed through La Técnica in early March with high hopes. He said he paid $20,000 to smugglers to get his spouse and kids to the Texas border to claim asylum. Ruiz, who had a previous deportation order, didn’t intend to cross, but he accompanied his family much of the way to ensure their safety.

Just over a week later, Ruiz told Reuters his wife and children had been expelled to Mexico.

“We went because we heard the news that there were 100 days of free passage!” Ruiz exclaimed by telephone. “Now we’re screwed.”

Hernández and her two children were luckier. She said that on March 19 her family turned themselves in to CBP in Texas’ Rio Grande Valley, only to be released two days later to start the journey to Maryland, where her mother resides.

The news organization could not determine why the three were admitted while other families were not. CBP said it could not comment on the case due to security and privacy reasons.

Hernández’s WhatsApp profile now features a photo of her, the children and their grandmother beaming with happiness following their reunion. That portrait of success travels with each message she sends to friends and family back in Honduras.