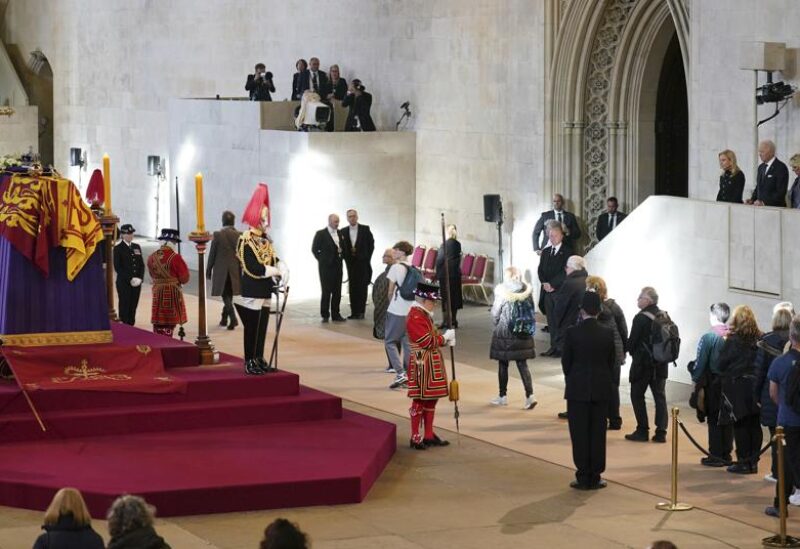 US President Joe Biden and First Lady Jill Biden, far right, view the coffin of Queen Elizabeth II lying in state on the catafalque in Westminster Hall, at the Palace of Westminster, London, Sunday Sept. 18, 2022. (Joe Giddens/Pool Photo via AP)

Presidents of the United States typically make a big impression when they visit other countries, stealing the show and swiftly assuming the focus.

For U.S. President Joe Biden and other presidents, prime ministers and dignitaries, there were no red-carpet arrivals, no big speeches and no news conferences as they gathered for Monday’s state funeral for Queen Elizabeth II. Instead, world leaders used to people hanging on their every word checked their egos in the service of honoring the queen, Britain’s longest-serving monarch, who died earlier this month at age 96 after 70 years on the throne.

“They know that they are there to honor the passing, honor the individual,” said Capricia Marshall, who was the U.S. State Department’s protocol chief for a period during Barack Obama’s administration. “They also are aware that they’re representing their country.”

The protocol office is a key player in U.S. foreign policy and diplomatic affairs by working to make sure that U.S. officials don’t say or do anything that will offend a foreign visitor or host.

The president and first lady are among some 2,000 people attending the funeral at Westminster Abbey. They arrived late Saturday and were met at the airport by the U.S. ambassador and a few other officials. The couple paid respects to the queen on Sunday, viewing her coffin at Westminster Hall, signing condolence books at Lancaster House and attending a Buckingham Palace reception for funeral guests hosted by King Charles III.

But the president’s public appearances in London have been limited and controlled, part of the choreography around the elaborate farewell to the only monarch most Brits have ever known. He spoke only for just a few minutes Sunday about the queen, as he recalled how the woman he said reminded him of his mother kept feeding him crumpets when they had tea together last year at Windsor Castle.

When Biden spoke to the BBC, the only outlet broadcasting live as he signed the condolence book, the network kept up a split screen with Sir David Manning, a former British ambassador to the U.S., and did not air Biden’s comments live.

Most other leaders in town have kept similarly low profiles, appearing so far only to sign the official book of condolence and silently pay respects beside the queen’s coffin in Westminster Hall.

A few have given interviews to share memories of Elizabeth, including New Zealand Prime Minister Jacinda Ardern, who told the BBC about the advice the queen gave her on balancing work and motherhood: “I remember she just said, ‘Well, you just get on with it,’ and that was actually probably the best and most I think factual advice I could have.”

Leaders like Ardern and Australian Prime Minister Anthony Albanese have batted away questions about whether their countries are likely to become republics, saying now is not the time to discuss it. Both countries have the queen as their monarch.

An exception was Brazil’s President Jair Bolsonaro, who is running for reelection and delivered an open-air campaign speech Sunday outside his country’s embassy in London. Bolsonaro, who trails former President Luiz Inácio Lula da Silva in opinion polls, insisted to about 200 supporters that the polls were wrong and that he could avoid entering a runoff on Oct. 2.

Biden and new U.K. Prime Minister Liz Truss scrapped a weekend meeting, instead setting a full gathering at the U.N. General Assembly next week, and the White House didn’t even announce news of the meeting until after British officials had.

One senior U.S. official said Biden’s lower profile was less about protocol and more about the fact that “it’s not our show. It’s the Brits’ show.”

“We have to be sensitive to that and I think that means a kind of a different perspective as it relates to our movements, our footprint, what we do, how we do it,” said the official, who was not authorized to comment publicly and spoke on condition of anonymity.

Peter Selfridge, another former U.S. official, said Biden is here “to grieve” and likely does not care that he has largely been out of the spotlight. Selfridge noted the president’s history of personal loss, including the death of his first wife and infant daughter and, later, an adult son.

“As a matter of fact, that’s probably the way he wants it,” said Selfridge, the U.S. chief of protocol during Obama’s second term.

Then again, some people’s wiring doesn’t allow them to avoid making a beeline for the first camera they see, said Eric Dezenhall, a crisis management expert.

But Dezenhall said in an email that the “good news is that most American presidents … understand that humility is called for at certain times.”