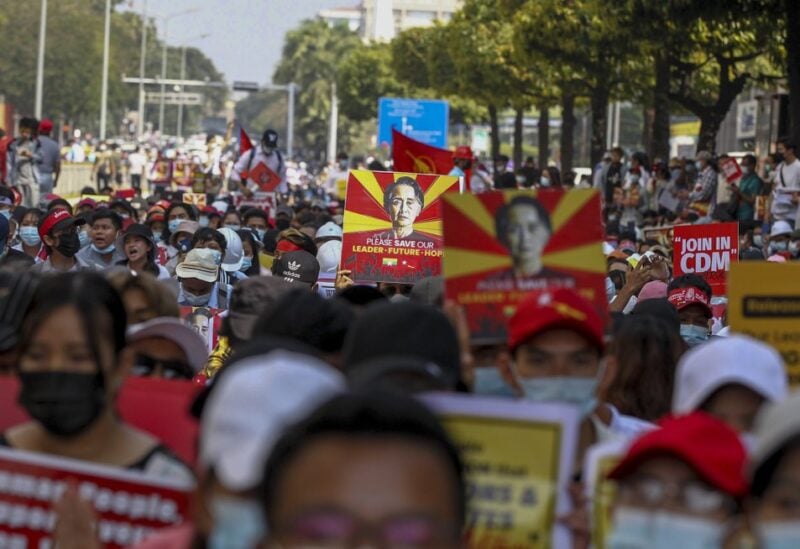 YANGON, Myanmar: Demonstrators in Myanmar gathered Wednesday in their largest numbers so far to protest the military’s seizure of power, as a U.N. human rights expert warned that troops being brought to Yangon and elsewhere could signal the prospect for major violence.

U.N. rapporteur Tom Andrews said he was alarmed by reports of soldiers being transported into Yangon, the biggest city.

“In the past, such troop movements preceded killings, disappearances, and detentions on a mass scale,” he said in a statement issued late Tuesday by the U.N. Human Rights office in Geneva. “I am terrified that given the confluence of these two developments – planned mass protests and troops converging – we could be on the precipice of the military committing even greater crimes against the people of Myanmar.”

Fresh protests roiled Yangon, the second-largest city of Mandalay and the capital Naypyitaw, in defiance of an order banning gatherings of five or more people.

“Let’s march en masse. Let’s show our force against the coup government that has destroyed the future of youth and our country,” Kyi Toe, a spokesman for the National League for Democracy party of ousted leader Aung San Suu Kyi, wrote on his Facebook page.

Wednesday’s turnout in Yangon appeared to be one of the biggest so far in the city. Protesters have adopted a tactic of blocking off streets from security forces by parking vehicles in groups with their hoods up and the excuse of having engine trouble.

In Naypyitaw, thousands including private bank employees and engineers marched down its wide boulevards, chanting for the release of Suu Kyi and President Win Myint.

Protesters also poured into the streets of Mandalay, where on Monday security forces pointed guns at a group of 1,000 demonstrators and attacked them with slingshots and sticks. Local media reported that police also fired rubber bullets into a crowd and that a few people were injured.

The marches have been organized as part of a civil disobedience movement, spearheaded by medical workers and supported by many civil servants.

The Feb. 1 coup has brought an abrupt halt to Myanmar’s fragile progress toward democracy, as Suu Kyi’s party was about to begin a second five-year term after winning a landslide in November’s election. The military justified its takeover with allegations of widespread voting irregularities, though the election commission found no evidence of significant fraud. The junta says it will hold power for a year before holding new elections.

Police filed a new charge against Suu Kyi, her lawyer said Tuesday, a move likely to keep her under house arrest and further fuel public anger.

Suu Kyi already faced a charge of illegally possessing walkie-talkies. The new charge concerns a law that has been used to prosecute people who have violated coronavirus restrictions, lawyer Khin Maung Zaw told reporters after meeting with a judge. It carries a maximum punishment of three years in prison.

“New charges against Aung San Suu Kyi fabricated by the Myanmar military are a clear violation of her human rights,” he tweeted. “We stand with the people of Myanmar and will ensure those responsible for this coup are held to account.”

U.N. spokesman Stéphane Dujarric said the world body stood by its denunciation of the coup and has called for charges against Suu Kyi to be dropped and for her to be released.

For a third night in a row, the military ordered an internet blackout — almost entirely blocking online access from 1 a.m. to 9 a.m. It has also prepared a draft law that would tighten surveillance of cyberspace and criminalize many online activities.

While the military did not say why the internet was blocked, there is widespread speculation that the government is installing a firewall system to allow it to monitor or block online activity. Social media users have speculated widely that neighboring China, with extensive experience in censoring the internet, was giving technical assistance for such a project.

China has so far not condemned the takeover. Some protesters have accused Beijing — which has long been Myanmar’s main arms supplier and has major investments in the country — of propping up the junta.

China’s Ambassador Chen Hai said Beijing wished the protesters and the military could solve their differences through dialogue, according to the text of an interview posted on the embassy’s Facebook page Tuesday.

“The current development in Myanmar is absolutely not what China wants to see,” he said.

Chen also denied that China was helping Myanmar to control its internet traffic and that Chinese soldiers were showing up on the Myanmar’s streets.

“For the record, these are completely nonsense and even ridiculous accusations,” Chen said.