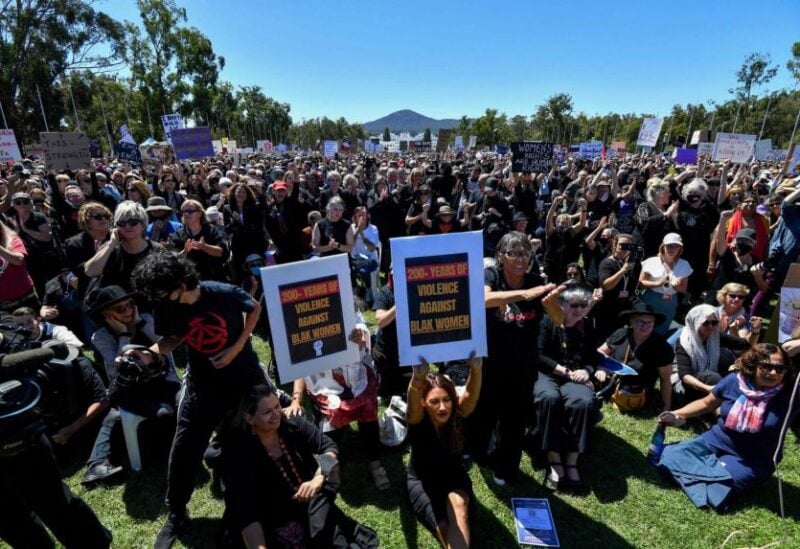 Tens of thousands of women gathered outside Australia’s parliament and across the country on Monday, calling for gender equality and justice for victims of sexual assault.

The March 4 Justice rallies were spurred by a recent wave of allegations of sexual abuse, discrimination and misconduct in some of Australia’s highest political offices.

Women wore black to signal “strength and mourning” and chanted “We will not be silenced”. Protestors in Melbourne carried a meters-long white banner bearing the names of women killed in Australia from gendered violence since 2008, while those outside Parliament House in Canberra prepared to deliver two petitions demanding change.

While leaders of the major opposition political parties came out to join the crowds in Canberra, a delegation of organizers rejected an invitation to meet with Prime Minister Scott Morrison in private.

“We’ve come to his front garden,” Janine Hendry, one of the organizers, told Reuters. “We are 200 meters from his office and it’s not appropriate for us to meet behind closed doors especially when we are talking about sexual assault which does happen behind closed doors.”

Recently reported scandals include a rape allegation against Attorney-General Christian Porter, who has strongly denied the alleged 1988 assault.

Porter lodged defamation proceedings in Australia’s Federal Court on Monday against the Australian Broadcasting Corp over a news article on the alleged rape. The ABC did not immediately respond to the legal action.

A former senior political adviser for Morrison’s Liberal Party has also been accused by several women of rape or sexual assault. The man has not been named, nor commented publicly on the allegations.

The public anger over the government’s handling of the alleged incidents mirrors the sentiment on display at protests in London over the weekend following the killing of 33-year-old Sarah Everard, who disappeared while walking home at night-time.

Morrison had been enjoying strong public approval ratings, chiefly for his handling of the coronavirus pandemic, but a Newspoll conducted for The Australian newspaper published on Sunday showed the centre-left Labor party has pulled ahead of Morrison’s Liberal-led coalition on a two-party preferred basis.

Morrison said Australia had made big strides toward gender equality over the years, though he acknowledged the job was “far from done” and he shared the concerns of the protestors.

However, he raised some hackles by expressing pride in the right to peaceful protest: “Not far from here, such marches, even now, are being met with bullets, but not in this country.”

Among the gatherings, protestors in the seaside town of Torquay lined up on the beach to form the word “justice”.

“The start of the solution is quite simple – making noise,” Grace Tame, a sexual assault survivor and advocate who was named Australian of the Year, told the crowd in Tasmania.

The politically charged assault allegations are expected to dominate parliamentary proceedings in coming days. Both Porter and Defense Minister Linda Reynolds – who has been criticized for failing to report an alleged rape of one of her former staff members by another – are both on sick leave.

Reynolds on Friday apologized “unreservedly” and reached a financial settlement with her former staff member Brittany Higgins over the latter’s allegation of rape by the unnamed former Liberal employee in Parliament House. Reynolds had called Higgins a “lying cow” in front of staff, a comment she said referred to comments by Higgins about her treatment after the alleged assault, not the attack itself.

Higgins told the gathering in Canberra she hoped to bring about changes to workplace culture to “ensure the next generation of women can benefit from a safer and more equitable Australia.”

Deirdre Heitmeyer, 68, said she drove for more than six hours to attend the protest.

“I can’t believe we have to still do this,” she told Reuters. “We were out in the 1970s calling for equality and we are still here.”