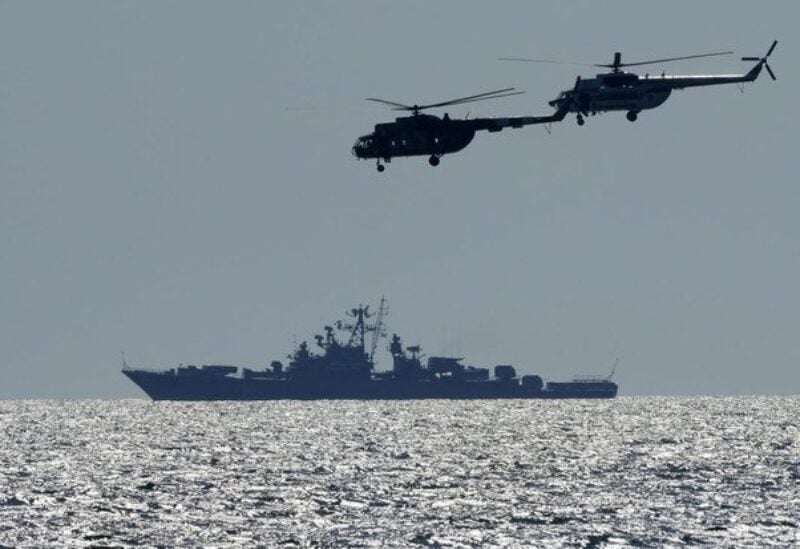 Dozens of warships were involved  in a two-week Ukraine and NATO Black Sea drills to show their strong defense ties and capability following a confrontation between Russia’s military forces and a British destroyer off Crimea last month.

The Sea Breeze 2021 maneuvers set to wrap up Saturday involved about 30 warships and 40 aircraft from NATO members and Ukraine. The captain of the USS Ross, a U.S. Navy destroyer that took part in the drills, said the exercise was designed to improve how the equipment and personnel of the participating nations operate together.
“We’d like to demonstrate to everybody, the international community, that no one nation can claim the Black Sea or any international body of water,” Cmdr. John D. John said aboard the guided missile destroyer previously deployed to the area for drills. “Those bodies of water belong to the international community, and we’re committed to ensure that all nations have access to international waterways.”

The Russian Defense Ministry said it was closely monitoring Sea Breeze. The Russian military also conducted a series of parallel drills in the Black Sea and southwestern Russia, with warplanes practicing bombing runs and long-range air defense missiles’ deploying to protect the coast.
Last month, Russia said one of its warships in the Black Sea fired warning shots and a warplane dropped bombs in the path of the HMS Defender, a British Royal Navy destroyer, to chase it away from an area near Crimea that Moscow claims as its territorial waters.
Russia denounced the Defender’s presence as a provocation and warned that next time it might fire to hit intruding warships.
Britain, which like most other nations didn’t recognize Russia’s 2014 annexation of Crimea from Ukraine, insisted the Defender wasn’t fired upon on June 23 and said it was sailing in Ukrainian waters when Russia sent its planes into the air and shots were heard during the showdown.

The incident added to the tensions between Russia and the NATO allies. Relations between Russia and the West have sunk to post-Cold War lows over Moscow’s 2014 annexation of Crimea, its support for a separatist insurgency in eastern Ukraine, accusations of Russian hacking attacks, election interference and other irritants.
Russian President Vladimir Putin said last week that the incident with the Defender wouldn’t have triggered a global conflict even if Russia had sunk the British vessel because the West knows it can’t win such a war. The statement appeared to indicate Putin’s resolve to raise the stakes should a similar incident happen again.
Aboard the Ross, John said the Sea Breeze participants were exercising their right to operate in international waters. He described the drills as “a tangible demonstration of our commitment to each other for a safe and stable Black Sea region.”