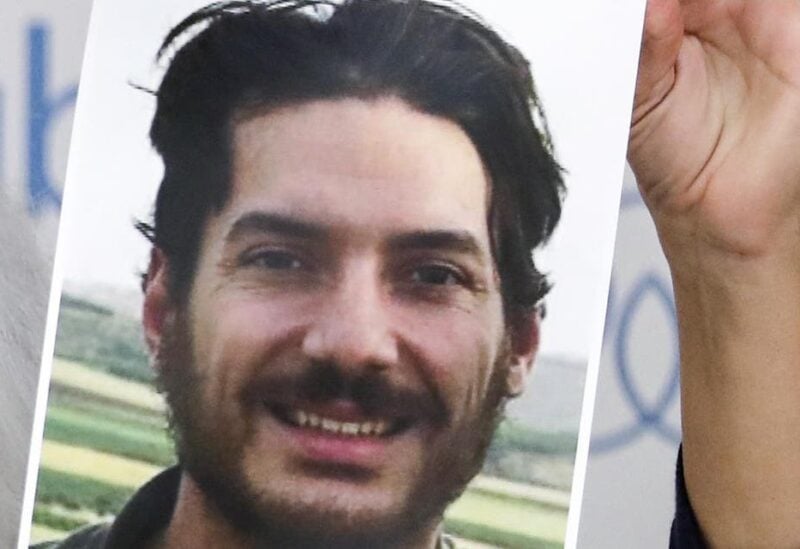 A file photo shows Debra Tice (unseen), mother of US journalist Austin Tice who was kidnapped in Syria five years prior, holds a dated portrait of him during a press conference in the Lebanese capital Beirut on July 20, 2017. (Joseph Eid/AFP)

US Secretary of State Antony Blinken has urged Syria’s president to use his power to free Austin Tice, a US journalist abducted nine years ago, on his 40th birthday Wednesday.

“I am personally committed to bringing home all Americans held hostage or wrongfully detained abroad. We believe that it is within Bashar al-Assad’s power to free Austin,” Blinken said in a statement.

“Austin Tice must be allowed to return home to his loved ones who miss him dearly and to the country that awaits him eagerly.”

State Department spokesman Ned Price said that the United States was seeking the assistance of Syrian officials on finding Tice and other missing Americans.

Tice was a freelance photojournalist working for Agence France-Presse, McClatchy News, The Washington Post, CBS and other news organizations when he disappeared after being detained at a checkpoint near Damascus on August 14, 2012.

Tice appeared blindfolded in the custody of an unidentified group of armed men in a video a month later but there has been little news since.

Last year the previous administration of Donald Trump sent a White House official on a rare mission to Damascus to seek the freedom of Tice and Majd Kamalmaz, a Syrian-American doctor who disappeared at a checkpoint in February 2017. The mission yielded no visible results.

The appeals to Syrian officials come despite the absence of diplomatic relations with Damascus and continued US efforts to isolate Assad, whose forces have wrested back control of most of the country following a brutal decade-long civil war.

More than 380,000 people have died and millions displaced in the war that helped give rise to ISIS and triggered a migration crisis that rocked European politics.