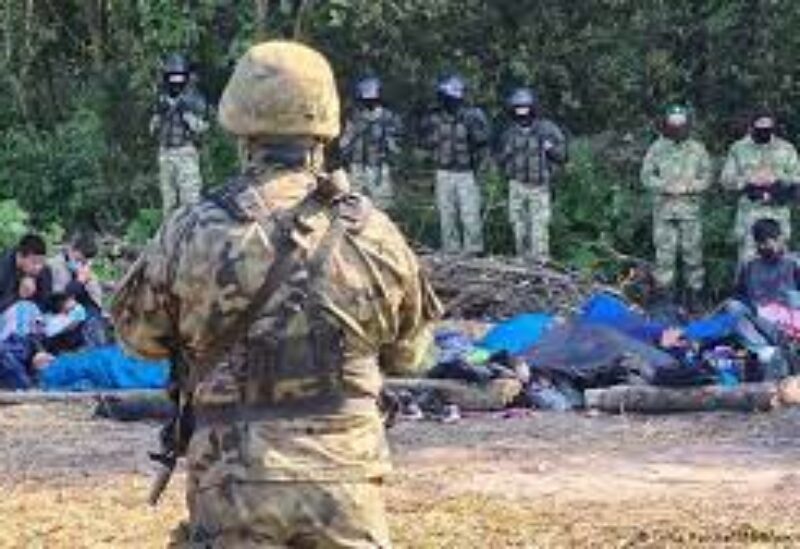 Polish TV station TVN reported on Saturday, that the body of a young Syrian man aged about 20 had been found in the forest near Wolka Terechowska. “The cause of death has not yet been determined,” as Reports from the border between Poland and Belarus are becoming more and more tragic.
It also reported that about a hundred people had tried to cross the border at the same place at the same time, but that their attempts had been stopped. It said that Ukrainian and Polish human traffickers planning to drive migrants to Germany had been arrested.
The daily situation reports from the Polish border police have sounded very similar for months. The government has deployed additional police and army units and erected a temporary barbed wire fence.
According to Polish sources, there are some 4,000 people stranded in the area. They are mainly from Iraq, Syria and Afghanistan, and frequently try to cross the border.
On Saturday, Polish President Andrzej Duda paid a visit to troops stationed on the border and thanked them for their defense of Poland and the EU.
The situation is not dissimilar on the border between Lithuania and Belarus, where the Lithuanian border police have registered hundreds of illegal attempts to enter the country in the past few weeks. Since the beginning of the year, more than 4,000 people have crossed into Lithuania from Belarus illegally. More than 6,000 were turned away by border officials.
According to Andrzej Pukszto, a political scientist at the University of Kaunas in Lithuania, there is broad political consensus between both the government and the opposition with regard to the situation, and all politicians hold Belarusian ruler Alexander Lukashenko responsible for the crisis.
However, they disagree when it comes to the amount of help that Lithuania should be offering those trying to cross the border.
“There are many people in need in Lithuania, people who are subsisting on the poverty line or even below it,” said Pukszto.
According to official statistics, 20% of the population was in this situation in 2020.
“That is why there is a heated debate as to how many migrants and refugees the country can take in,” he explained, insisting, on the other hand, that there had not been any major protests against refugees in Lithuania.
Juris Rozenvalds, a sociologist at the University of Latvia in Riga, said that there was a similar consensus regarding migration in Latvia, pointing out the unanimous support in parliament of the decision to impose a state of emergency at the border with Belarus in August.
He said that until the middle of the summer, at least 400 refugees who had crossed the border had been accepted. “In recent months, 60 people – mainly women and children – have been accepted on humanitarian grounds.”
The Latvian politician Boris Tsilevich, who is the chairperson of the Committee on the Election of Judges to the European Court of Human Rights, explained that the government had a tough balancing act to perform: It had to prevent illegal attempts to enter the country and at the same time fulfill its international obligations to uphold human rights. This was “damned difficult,” he said.
In Poland, the political debate is considerably more heated than in Lithuania and Latvia. All the parties are in agreement that Lukashenko is to blame, but they disagree on the approach to take. Many opposition politicians do not understand the government’s refusal to accept help from the European Union to secure the borders.
The head of the ruling Law and Justice party PiS, Jaroslaw Kaczynski, is seeking support elsewhere: He has invited former Italian interior minister and leader of the populist Lega Nord Matteo Salvini and other far-right politicians to talks in Warsaw in December on “defending Europe’s borders.”
Though it is hard to tell what will happen, what is certain is that the state of emergency in Poland is due to end on December 2 and cannot be extended for constitutional reasons. Will martial law be imposed instead? Polish Prime Minister Mateusz Morawiecki has said no.
Parliament has approved the building of a five-meter-high wall at the border with Belarus, but it is not due to be erected before the spring.