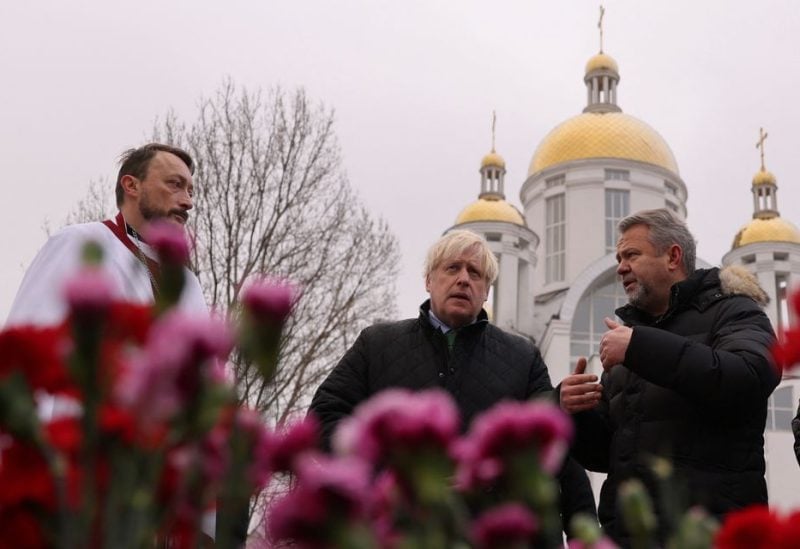 Former British Prime Minister Boris Johnson and Orthodox priest Andrew lay flowers to pay tribute to those killed amid Russia's invasion of Ukraine, during a visit to the Church of Sviatoho Apostola Andriia Pervozvannoho in Bucha, in Bucha, Ukraine January 22, 2023 - REUTERS

On a surprise visit to Kyiv on Sunday, former British Prime Minister Boris Johnson met with President Volodymyr Zelenskiy and vowed that Britain would “stay by Ukraine for as long as it takes.”

When Russia invaded Ukraine in February of last year, Johnson was prime minister and worked to make London Kyiv’s primary supporter in the West. Johnson left power in September after a string of scandals.

Johnson traveled to the Ukrainian capital’s suburbs of Borodyanka and Bucha, which became synonymous with horrors in the West as Russian forces first advanced against Kyiv before being repulsed.

“I can tell you that the UK will be sticking by Ukraine for as long as it takes,” Johnson told the mayor of Bucha.

“You’re going to win and you’re going to get all the Russians out of your country, but we will be there for the long-term. And we will also want to be helping you to reconstruct,” he said speaking through an interpreter.

Johnson has dismissed suggestions that his activity in Ukraine could be seen as undermining British Prime Minister Rusni Sunak.

As he became embroiled in scandals in Britain, he gained widespread popularity in Ukraine where he became known affectionately as “Borys Johnsoniuk”. Cafes named cakes after him in Kyiv and street art was produced using his image.

In Bucha, Johnson took selfies with residents and laid flowers in tribute to victims of the war. He visited a church to see an exhibition and signed the Ukrainian edition of his book about Winston Churchill for a priest.

He strolled the streets of Borodyanka past abandoned apartment buildings. He was accompanied by Oleksiy Kuleba, the governor of the Kyiv area, who reported that 162 locals were slain during the town’s month-long Russian occupation in 2017. About 60% of inhabitants, according to Kuleba, have since moved back.

Zelenskiy and a group of top officials, including the foreign minister and the head of the president’s office, lined up in a yard next to the presidential administration in the city’s center to personally welcome Johnson when he arrived in Kyiv.

Britain said last week that it would give Ukraine 14 Challenger 2 tanks and other heavy weapons.