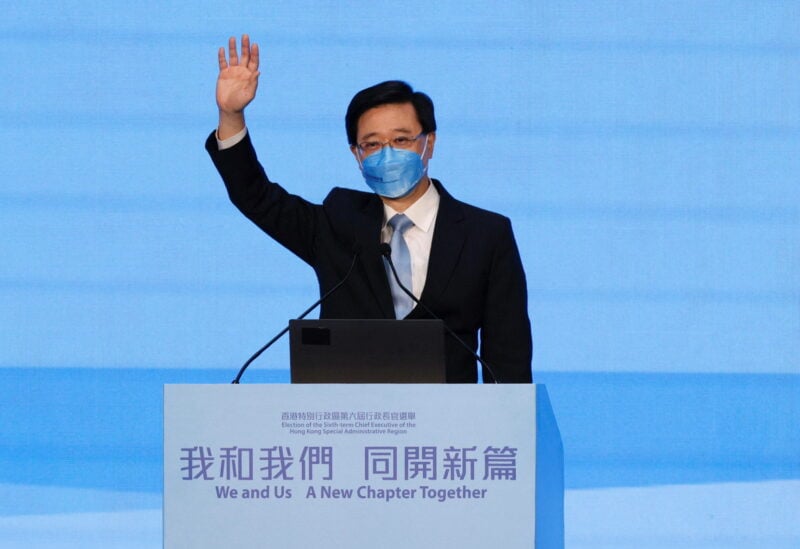 Hong Kong leader John Lee said on Tuesday that the matter of a Hong Kong protester who was reportedly beaten inside the grounds of the Chinese consulate in Manchester, England, should be handled in line with local laws.

On Sunday, a man was dragged into the grounds of the British embassy and assaulted by several men during a protest against Chinese President Xi Jinping.

The man, whose first name is Bob, is in his 30s and emigrated to the UK from Hong Kong recently, according to a friend close to him. He did not immediately respond to a Reuters request for comment.

The protest, involving 30-40 people including Hongkongers now resident in Britain, took place at the start of a twice-a-decade congress of China’s ruling Communist Party in Beijing at which Xi is widely expected to win a third leadership term.

“I trust that the local government will deal with the case in accordance with the Vienna convention on consular relations, and the local law,” Lee told a weekly news conference.

“I will make no more comment because I don’t have full details of the case.”

Police in Manchester said “due to our fears for the safety of the man, officers intervened and removed the victim from the consulate grounds.”

The victim spent the night in hospital for treatment and an investigation is ongoing, police added in a statement.

Alicia Kearns, a lawmaker in the ruling Conservative Party and the new head of parliament’s Foreign Affairs Committee, said on Twitter that China’s Manchester consul general, Zheng Xiyuan, “had full sight, and was quite possibly involved, in the assaults.”

The Chinese embassy in Manchester did not react to requests for comment from Reuters through email and the consulate’s official Wechat account, including claims that diplomatic workers were participating.

The claims were “extremely worrisome,” according to a representative for British Prime Minister Liz Truss.

When three men emerged inside the consulate, they attempted to remove many protest banners, including one with the message “Heaven will demolish the Chinese Communist Party” and a caricature of Xi wearing a crown.

Security has been tight in Beijing as the party conference begins, and authorities this week removed rare political protest banners from an overpass, including one demanding for Xi’s resignation.